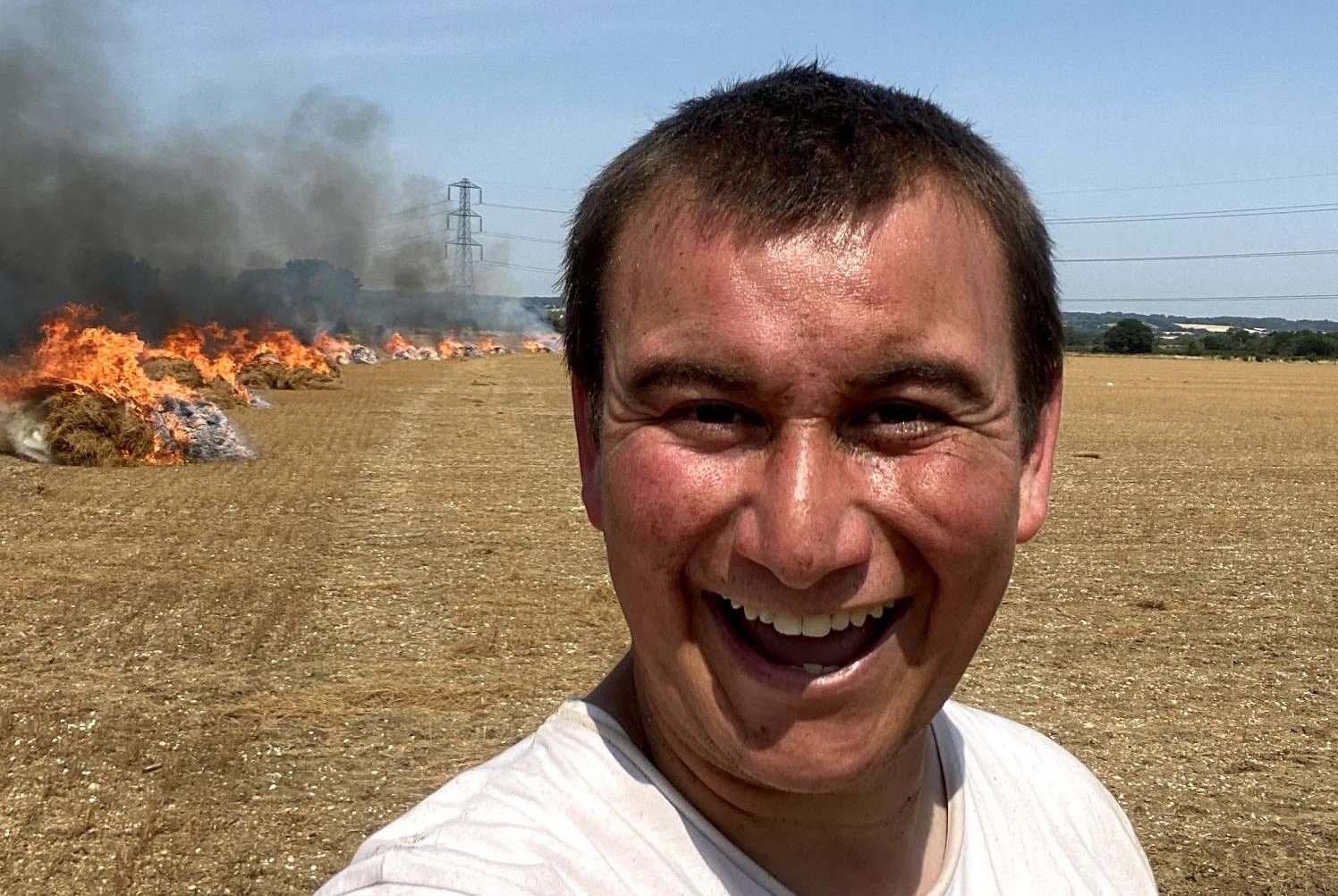 It’s mid August as I type this, and as of yesterday the bulk of our harvest has been finished, with just five hectares of buckwheat and three of hemp left to put through the combine harvester.

Whilst COVID-19 might not have directly affected many farmers in this part of the country, growing primarily arable crops on a large scale, we have instead been affected by a peculiar year of weather: Beset by a horrendously wet winter, followed by a spring drought, and now some of the most consistent and insane temperatures that I can remember.

I am currently melting in my office, and looking forward immensely to the ten degree temperature drop expected by this time next week!

Harvest began with my yellow peas. These are the dry kind of peas that you find in the shops, often split, and generally used in soups and daals.

They are super tasty! And having found a home (via a circuitous route) with Hodmedod last year, I have high hopes that the same will be true this year.

I was most pleased about these peas due to the lack of chemical inputs that were necessary to grow them – being insecticide-free for over five years is paying off in dividends, with a huge number of beneficial insects able to swarm into the crop in pretty short shrift and kill the nasty pests!

Obviously using this more organic approach to farming is never absolutely perfect. There were some peas with pea moth damage. This is a pest that lays its eggs in the peas, which then hatch and burrow out – leaving a holey, but still nutritious, pea.

However, in the long term when I have managed to set up my seed cleaning operation properly on the farm, my plan will be to clean (i.e. sort) out the damaged peas here in Fobbing.

This will mean a more valuable crop can be sold to the end user, since it contains no waste, but more importantly those damaged peas are still worth something.

They can be milled into pea flour (which makes seriously delish pancakes!), or if they are really badly damaged, they are still fantastic food for pigs and chickens.

No longer a waste product – now a secondary product. The true definition of circular farming.

After our peas we managed to zip through our wheat pretty sharp. Ordinarily on a good day we would cut 25 hectares of wheat. This year it was 35 hectares; faster because my yields are down between 20% and 30%.

What’s more, I was driving the tractor & trailer and despite the extra harvesting speed I still wasn’t kept busy.  I haven’t actually had the grain tested yet, but I do at least have my fingers crossed that it will make a premium bread-making market.

With the main wheat harvest wrapped up, we took a Friday afternoon at a somewhat more leisurely pace to harvest my heritage wheat crops. These were the ones grown without artificial inputs and fertiliser.

Unfortunately yield comparisons don’t mean a huge amount this year since the field was not in the best condition after such a wet winter.

Some patches had simply not grown. However, I have some good-looking samples of some very exciting wheats, all ready to be cleaned and then run through my flour mill, due to be shipped to America imminently.  A very exciting time.

I am most thrilled about my Percival’s Blue Cone ‘rivet’ wheat. This is a little like a durum wheat (which you use for pasta making), but durum isn’t well suited to UK climate.

I was delighted to be visited (just before the heritage wheats were combined) by Giovanni Carleschi (and his production manager, Vincenzo), who started ‘Pastificio Carleschi’ based in Leytonstone (click here to check out their Instagram, or head to their website: carleschi.co.uk).

He makes some genuinely superb pasta (I should know – he left me a box!) made from heritage and ancient grains such as einkorn, emmer and spelt.

I really can’t wait for him to get his hands on the blue cone flour. My only trepidation being that apparently the specifications for pasta flour are quite precise, with necessity for exceptionally fine sifting. I’m sure it’ll be fine!

On to new projects

I was also visited by Rosie Bristow one Sunday morning.  A massive benefit of this slower harvest has been my ability to accommodate visitors, and not feel like I’m sprinting about and not able to think!

Rosie is currently working for Flourish Produce based near Cambridge, producing some incredible organic market-garden veg.  Check out how great their produce looks here, and at their website: flourishproduce.co.uk.

She had found me on social media, and brought a gang from Flourish for the morning. This turned out to be a really excellent farm walk: lots of diverse and challenging questions, and some similar world views.

Rosie is very interested in the compostable textiles market; naturally she therefore wanted to see my hemp and linseed (samples of which she took away to have a play with and see about processing into fabric).

Linseed is a little different to flax which is grown to produce linen though, primarily due to linseed being a very short crop – modern varieties tend to stand somewhere around twelve inches.

So the plan is to run a trial with Rosie next year, growing perhaps as much as a hectare of flax for her (she is going on some processing courses imminently).

Some of the tricky parts are that flax is supposed to be harvested by pulling up the plant to keep the route intact, which leads to longer fibres.

But I’m sure with the big team of volunteers that Rosie will be able to muster it won’t take long to harvest.  And it’ll be a super fun project.

Agroforestry is the future

I managed to find a couple of days to finalise my agroforestry project as well, due to be planted this winter.  Agroforestry is the mixing of trees and farming (often crop farming).

I had been meaning to head up to Wakelyns Agroforesty in Suffolk for years, and was gutted that Professor Martin Wolfe (who pioneered this farm in the UK with his wife Ann) passed away before I visited.

However, I managed to make the trip, and met Martin’s son David and his wife Amanda. Words to describe Wakelyns are: resplendent, magical, calming, beautiful, majestic…  I could go on and on.

It is a fabulous haven in the middle of industrial farmland, showing what is possible – how we can return farms to a more natural habitat, embracing nature, producing a huge wealth of diverse nutritional products (and of course fibre to boot), whilst being an incredible environment for mindfulness.

An absolute inspiration.  Plus the trees create their own micro-climate, making a 30 degree day feel like 20. There is no doubt in my mind that this is the future of agriculture.

Having seen what a 25 year old scheme of tree-planting looked like (mostly with regards tree spacing) I felt confident to finalise my own scheme, utilising much A2 graph paper, and my niblings’ colouring pencils and crayons which usually reside at Mum and Dad’s!

It is a forward-looking scheme, with some standard woodland trees and fruit trees, but also with semi-wild fruiting margins and an experimental tree belt containing almonds, olives, peaches, nectarines & persimmon – for some of these it might take a couple of years to procure root stocks.

I am also hoping to be trying pomegranates and Szechuan pepper bushes. So in answer to anyone’s question: yes, I am banking on global warming!

The basic idea of my scheme is to have 6m tree belts, running north-south, and 36m alleys to grow crops in between these belts.

This will leave 14 small but well-ordered fields, and 14 tree belts.  I will explain more about this in a future article (hopefully when the tree-planting begins in November or December, provided everything goes to plan!).

After the heritage wheat, we were able to finish off our pea harvest, before moving onto cutting linseed. The yield on this was actually okay this year – nothing stellar, but I’ll take okay given the circumstances!

And of course linseed leads to one of the more fun jobs of the year… Linseed is a straw crop that we are still able to burn – since the fibres in linseed straw are so strong they will bind up in a combine if you attempted to chop them.

So instead, Dad jumped on the loader to row up the swaths of straw left by the combine into sensibly sized heaps, and I got the fun job of setting light to them (with my nephews in toe – they even both lit a couple.  I promise I am not promoting arson!).

I felt I deserved this fun job though, since before I got to light the fires I had had to clean out the combine tank (not so fun!).

The next crop on the agenda was lentils, and sorting any other seeds from lentils is exceptionally difficult, so it helps to start with as clean a slate as possible.

Unfortunately, modern combine harvesters are not at all designed for this feat, harbouring old seed in nooks and crannies all over the place.

And the tank is a very uncomfortable place to be: angular, sharp, and with no sensible place for shins, knees, or even a padded bottom.

With the sweat pouring, I got the job done though!  If you fancy witnessing how horrid this job really is, check out my buckwheat vlog on YouTube from two years back here!

Having made that effort, the lentils were kind enough to combine very nicely, and actually produced the same yield as last year (which was excellent) – not all my crops were poor!

I had to hold my nerve for about five days before choosing to cut them.  Any thunderstorms would have decimated the crop, knocking a lot of lentils out of their pods, and also making it challenging for the header of the combine to pick them up off the floor.

This is hard enough with a good crop anyway!  But luck went my way, and we finished that day by cutting our spring wheat crop.

With all these crops safe and sound in store, along with the wheat straw that we baled, it feels weird to be able to somewhat relax whilst still in the first half of August.

It would be much more normal to expect harvest to finish at the start of September. Buckwheat and hemp harvest are ten to fourteen days away.

So we have just been doing a little seeding of legumes into some grass fields. But most exciting of all: we are able to have next week off work!

I’m sure Paul (my farm worker) is ready for some down-time, and I certainly am – including shutting off my social media for a bit!