The future of the humble potato, with 'The Potato Shop' | Eat Farm Now
Home  >  Farm Uncategorised 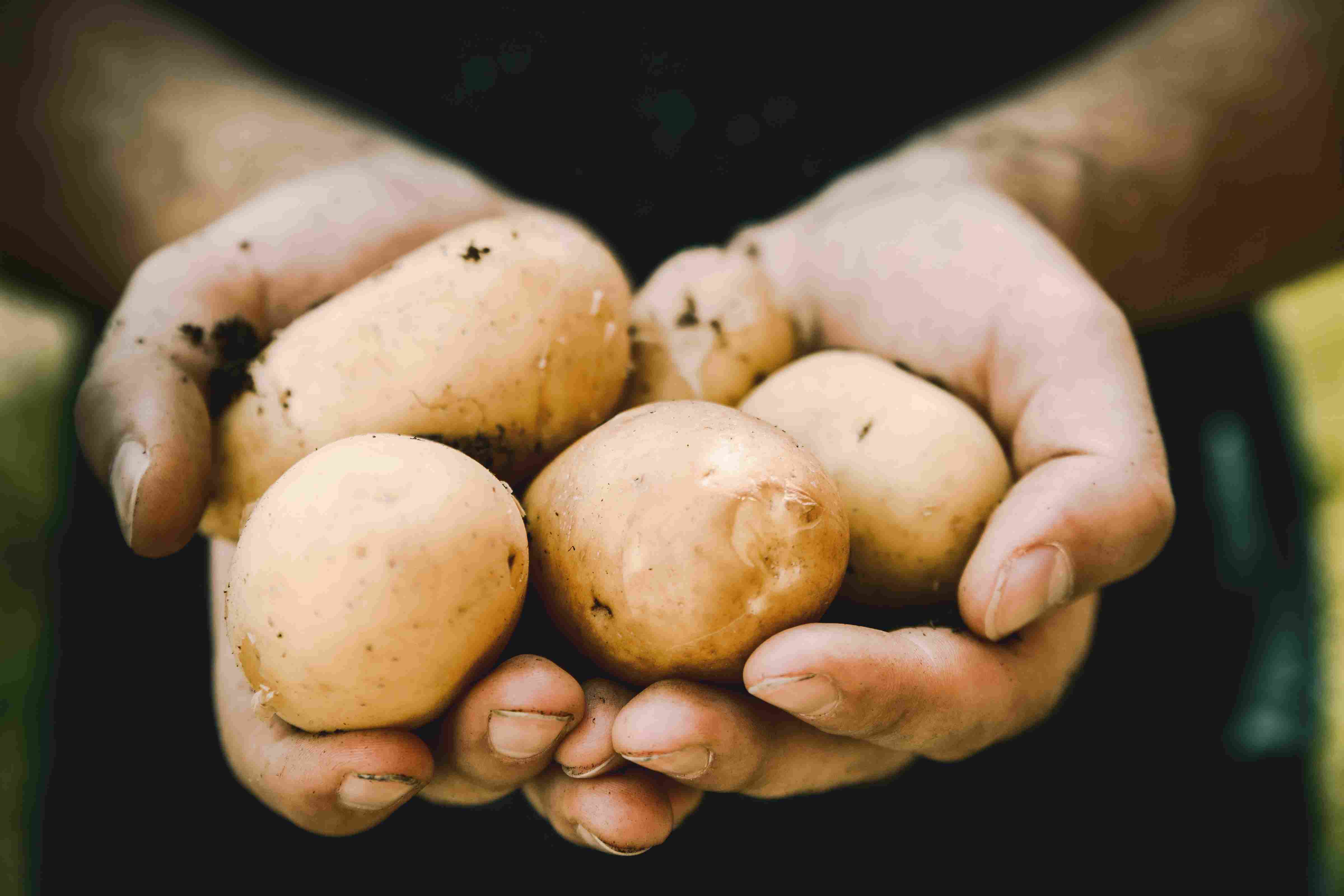 How are potatoes grown, which are the ones to look for? To find out I went to visit The Potato Shop and the potato farm on Morghew Estate in Kent, and talk to Nicki Crawley, the manager there.

Nicki gave me a warm welcome, and we headed off to take a look at the farm’s potato fields. I asked about the history of the Morghew estate, and Nicki told me that potatoes had been grown there for a long time.

Switching from mono-crop to heritage varieties

Nicki explained that when Tom Lewis bought the estate in 2001 the entire potato crop (all the standard Estima variety) was delivered to one of the big supermarket chains who paid less for it than it cost to grow.

That obviously didn’t make a lot of sense so, instead, the new owner innovated and began to grow potatoes with flavour, potatoes which he liked to eat himself.

The timing of this was auspicious – the demand for locally-grown, interesting heritage potatoes, which actually tasted of something, although nascent, was growing.

The Tenterden Potato Farm was the first to grow Pink Fir Apple potatoes agriculturally in the South East – and now it’s the largest producer in the region, last year (a particularly good year) producing a total potato harvest some 600 tonnes. In addition to the Pink Fir Apple the farm produces another 34 different types of potato.

Initially, Nicki tells me, they sold wholesale only, mostly to New Covent Garden and Bristol. Sales were made to other major city hub vegetable markets via Covent Garden. However, over the last year sales to private customers via the website have nearly doubled – some customers are chefs, buying 5-10 kilos at a time.

Violetta potatoes – one of 35 types grown at the farm

The potatoes are planted out in March and April, and then harvested in September – or at least that’s the plan!

“Look at these”, Nicki points to bedraggled long beds of drooping Yukon Gold, “we’re on the first day of August, and these already think it’s time for harvest. It’s because of this hot, dry weather we’ve been having.”

Next door to the Yukon Gold, lines of King Edwards, sporting pert flowers, seem to be more lively. Nicki digs some up.

“You can tell they’re King Edwards because of the red eyes – but they’re nowhere near ready for harvest – not nearly big enough,” she says.

The crop beside them, new Maris Peer potatoes, is also doing well. The potato crop is rotated with wheat, barley and rape seed (the farm makes its own oil as well) – Nicki explains this helps prevent disease.

Yukon Gold, drooping in the heat and dought

Once the plants start to dry out and die back naturally, they’re mowed, and then the potato harvesting machine comes – a beast of a vehicle.

It ploughs up the ground, collects up the potatoes and moves them along to the cabin of the machine where a couple of human hands will spot big clods of earth and throw them out.

“Then,“ says Nicki, “once back in the sorting room, it gets pretty frantic, people checking, correcting, sorting; harvest is a very lively time!”

A couple of people ride in the cab of the potato harvester, clearing out sticky clods of earth

It’s a beast of a machine

The potatoes are then stored at a temperature below 4ºC (raw potatoes don’t freeze well, incidentally, they go mushy when unfrozen) with ethanol pumped in to become ethylene gas. This stops them from sprouting and means that the supply of potatoes is steady year-round.

Off, into the fridge

I asked Nicki how the farm would respond if the hot dry weather began to be a regular, annual feature. She’s not sure, but comments, “it wouldn’t be a drought-resistant type, that would be a ‘modern’ potato – and we concentrate on the heritage varieties.”

“Within reason” Nicki tells me, “potatoes are good for you…they’re gluten-free….it’s what you cook them with that makes them less healthy…my favourite way of eating them, for example, is dauphinois potatoes.

With all that cream and butter, they can’t be good for you!”. Follow this link to the Potato Goodness site, for more information about potatoes and nutrition.

For sure, however, is the fact that potatoes are healthier if you eat the skins – a rich source of fibre. Good news for those not keen on peeling, and who like new or jacket potatoes.

It will be very interesting to see what the future holds for the humble potato, and whether climate change will force ‘modern’ drought-resistant potatoes to become the norm.