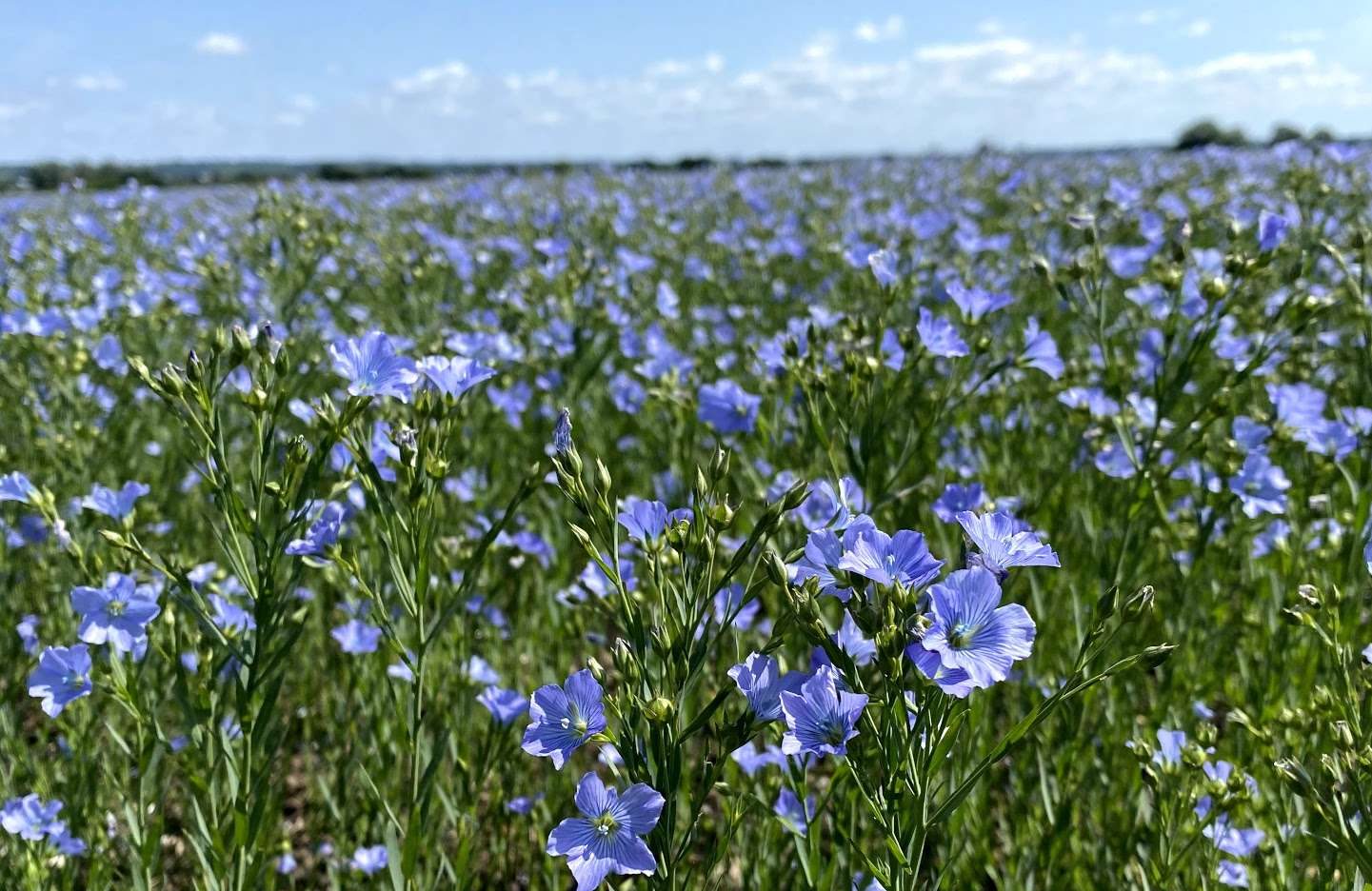 #Harvest20 is most definitely approaching and I’m pleased the wheat crop is still holding on – I had thought that the rain had come too late for it, but I am being proved wrong, which is obviously a good thing. This will give more time for the ears to swell with grain.
In preparation for harvest, we have set to cleaning out our grain stores.  The last of 2019’s wheat crop was moved off farm (to be made into biscuits instead of bread, which is unusual for us) a few days ago, leaving our sheds clear.
It is just left now for the professional cleaners to come in and give them a thorough spray.  We have also disinfected our trailers, so we are pretty close to being totally ready to get the combine harvester rolling.
I have taken part in a couple of webinars over the last few weeks which have been very enjoyable.  The first was with a group called Agricology which I do quite a lot of work with.
If you take a look on their website, there is a podcast of the event which can be listened to at this link.
The other farmer on this podcast was David Rose, who is doing some really tremendous ecological work on his farm, and has a very similar outlook to me when it comes to trying to get more people involved in farming.
The second webinar was part of Oxford Farming Conference 2021. Due to Covid-19, OFC21 will be a virtual event, and they have started six months early!
I was very honoured to have been invited to speak due to the line-up:  Tim Lang, Professor of Food Policy at City University; Beccy Speight, CEO of the RSPB; and Joanna Lewis, Policy & Strategy Director of the Soil Association. Obviously a trio of pretty heavy hitters…and me!
The session was entitled ‘Towards Greater Self-Sufficiency’, to do with how we should be feeding ourselves as a country.  It was a great fun discussion (able to be viewed on YouTube here), and it was super to have a platform to discuss my views on the necessity for hyper-local food hubs as a constituent part of food security.
I value this so highly from a policy point of view, because it would mean that every part of the country should have a thriving market for veg, fruit, nuts, meat, animal products, cereals, other combinable crops and fibre.
The cool thing being that by each area of the country being so mixed in their farming practices, it would produce a farming model where nature would end up being much more intrinsic to the farm, rather than secondary – a truly agro-ecological approach.
The relaxation of lockdown has been beneficial in enabling me to go and visit a couple of friends in other parts of the UK.  I got to see Fred Price (@gothelneyfarmer) which was really important for me, since I had a chance to look at some of his heritage wheat varieties and choose some that I want to try here next year.
Given my penchant for aesthetically pleasing crops, I was particularly delighted to see how striking one called ‘orange Devon blue rough chaff’ was.  It ought to be with such a mouthful of a name!
This visit also coincided with a Zoom call to Steve Jones from Washington State University in America (@wsu_bread_lab).  We were due to visit Steve in June, but this was the best-case alternative for this year.
It was so great to see the amazing set up they have: Lots of different types of flour mills set up, and so much other fascinating lab equipment. Cooler still was our second Zoom meeting, a fortnight later, where we were taken around their incredible plant-breeding plots.
The wheat varieties they are working on looked super, but the most exciting thing for me was that as well as being judged on how well they worked in the field, they were also judged on taste, and how they baked.
I loved seeing that they were also working on new buckwheat varieties and populations – I am trying to obtain a seed import licence (which I think will be a little tricky) such that I can get my hands on some of this seed!
Back on British soil, I have been having a few issues with teenagers trespassing in and around the farmyard.  I understand that it is a difficult time for them with all their usual haunts closed, however the criminal damage they have been inflicting is troubling:  Smashing a concrete wall panel on a grain store, opening up sheds and breaking into tractors (luckily not causing any damage…) and ripping haylage bales.
We have dug a very deep ditch with a bund around the recreation ground, and put up some barbed wire fencing, plus signs, but they are still getting in – sometimes having the gall to walk in through the farmyard!
I do my very best to keep the yard safe, but it is still a farmyard and I worry for the safety of those who are not under supervision or have not been trained.  I hate to think how much money I have spent on security, and how much more still I have to spend.
With harvest due to start reasonably soon, I would ask everyone to remember that there will sometimes be tractors and trailers on the roads – in Fobbing and all about too.
Please exercise care when in their vicinity, and take note of their indicators!  I have heard of a great many crashes due to a car overtaking when a tractor was turning right into a field.
But most of all, enjoy the change of scenery that occurs when harvest happens. And don’t forget to give me a wave!

George Young
07792 508 611
George@FobbingFarms.co.uk
@farmingGeorge
About Farming George
George Young, aka “@FarmingGeorge”, farms at Fobbing Farm in the village of Fobbing, South Essex, UK. George is driven to create a farming mode whereby nutritious food and sustainable fibre production are coupled with ecology and education.
To that end, the crops grown currently at Fobbing Farm comprise wheat, OSR, peas, beans, linseed, and on the more interesting spectrum: heritage cereals, buckwheat, hemp, lentils and experiments with heritage corn.
George is currently working on a new farming and food “farm to fork” model. He is desperate to promote new food production onto his farm, primarily in the form of a dairy, layer chickens, market gardening, and agroforestry (on top of the current arable cropping).
And to ensure the farmed products leave the farm in a finished food form by integrating food enterprises into the farmyard.
Related Articles
Share Article