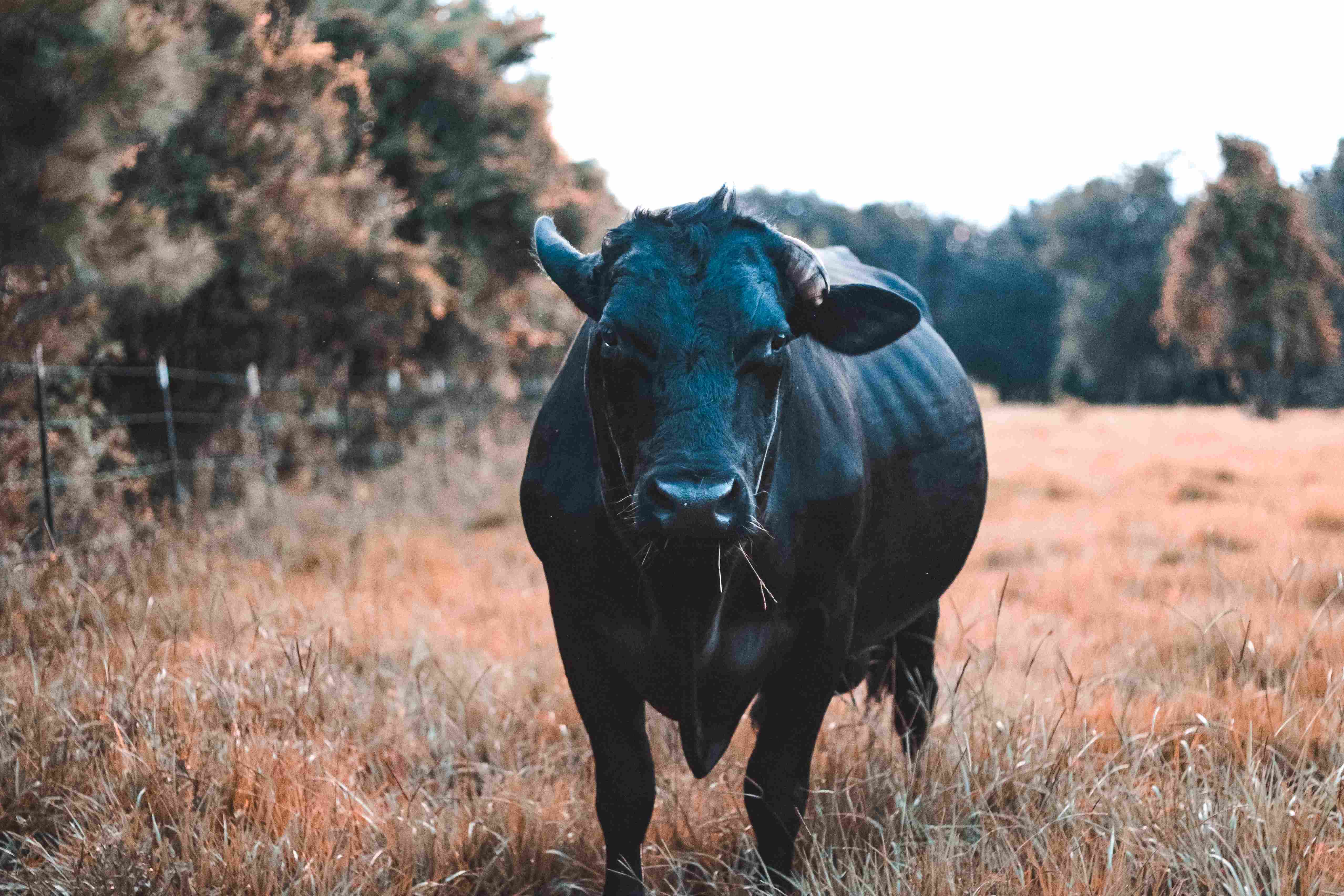 Is anyone else struggling to keep up with Channel 4’s wall-to-wall meat coverage? Shrewdly scheduled to coincide with Veganuary, it’s going at it with both barrels.

But like many viewers these days I consume most TV on catch-up. Meat the Family and How to Steal Pigs and Influence People are on my All4 list. A week after broadcast, I finally got around to watching Apocalypse Cow.

My take on it?

George Monbiot had to say something new.

“Stop eating red meat” has been done to death. Liz Bonnin was late to the party when she triumphantly announced on BBC One’s Meat: A Threat to Our Planet that she had turned her back on beef. Even Birds Eye had beaten her to the plant-based burger.

No, to cut through and get some headlines, Apocalypse Cow had to push the boundaries even further. George had to serve up something truly outrageous.

How about…The End of the Agricultural Age? Yes, yes! Farming will be dead in 30 years! And not just livestock farming…

“What – even crops George?”

Nice, easy pitch. Simple argument. Guaranteed to piss off the NFU (his favourite sport) and get some media coverage to boot.

We seriously need a reality check people. We’re getting to the point where some journalists are losing the plot.

I almost choked on my muesli listening to the BBC’s Today programme on Friday morning. Mishal Husain was interviewing Hilary McGrady, Director-General of the National Trust, about planting 20 million trees on their land over the next decade and putting 10% of current farmland into woodland.

As McGrady explained they will only convert land if the tenant does not want to continue farming it, and no farmer will be forced out, Husain butted in with: “But if they’re using the land for pasture, if they have cattle, that land needs to be used for tree planting?”

Yuck, cattle. Yeah – chuck them off! Plant trees instead!

Husain might as well have asked: “What if they’re dealing drugs from the farm?”

McGrady, audibly confused, replied with: “To be clear, if a farmer wants to continue farming in whatever way – because we don’t control how our farmers decide to farm – they can continue to do that.”

Farming livestock is not a crime (I can’t believe I’m actually writing this). Eating meat is not a crime. And this simplistic narrative of vilification is undermining the serious environmental debate.

As an aside, it’s worth pointing out that many farmers own their land. It belongs to them and, ultimately, they can farm what they want – crops, cows, sheep, pigs, chickens. Just as we pick our careers – they choose theirs.

Attacking them might not be the best way to get them to change, and you can’t just wrestle their cows off them. Unless we’re talking about making livestock farming illegal (we’re not…are we?)

I like George Monbiot. He’s an incredibly clever bloke – intimidatingly intelligent, in fact. A professional provocateur, people seem to forget he makes a living from stirring the pot. He’s a columnist for heaven’s sake! We should not be surprised when he has opinions.

I met George in 2017 and interviewed him for my Nuffield Farming Scholarship study: “How the Mainstream Media Portrays Farming to the Public” (if you fancy reading it, you can download the report here by searching for ‘Anna Jones’ in the author section).

George Monbiot is the master of setting out an extreme argument (such as AGRI-DOOM!) as a way of getting the rest of us to move towards the middle-ground, where positive change is much more likely to happen.

“I am deliberately staking out a position,” he told me. “It’s an idealised position. I know we won’t get things to change as far as that. I am setting out my stall; a spectrum of possibility in which I express my desires. I then make it easier for others to find the political space in which change can take place.”

His motivations are honourable but his methods are divisive.

I actually thought Apocalypse Cow was excellent. Beautifully shot and imaginatively treated by producer/director Peter Gauvain. The contributors were fantastic; the script was crystal clear.

Just when you’re thinking, “yeah, but what about…?” there’s an answer (not necessarily the one you’re looking for but at no point was I left hanging). Whatever you think of Monbiot he sets out his arguments brilliantly, and I agreed with a lot of it.

He lost me with the whole “death spiral” of agriculture thing. He thinks by the middle of this century we’ll all be eating synthetic, lab-grown food and “we will see most farming in the world no longer there”.

Considering we’re already 20 years into this century, that gives the world’s farmers (including 80% of sub-Saharan Africans and 56% of the population of South Asia) just 30 years to shuffle off and find something else to do. Okaaaay.

Anyone who reads my blog regularly will know that I don’t buy into the whole ‘anti-farmer’ media conspiracy. I believe in strong challenge and scrutiny. I think the agricultural industry can be unhelpfully defensive and petulant about the serious environmental issues knocking on their door. I’ve called them out on this many times.

But preaching the End of the Agricultural Age and cheerily extolling the extinction of farmers? Too far.

More than anything, I find it insincere. Fake. Just like the synthetic pancake he got so excited about. George did not convince me for one second that he believed what he was saying at this point. And that’s why I’ve lost some respect for him.

Instead, I saw a man who enjoys goading farmers – in particular the NFU – and knows how to needle them. I saw a talented journalist spinning a clever line. I saw a poster boy playing to a noisy minority who will swallow anything he says without a single critical thought.

And many of his fellow environmentalists see through it too. Since Apocalypse Cow aired, I’ve spoken to some of my contacts working for environmental charities, NGOs and research institutes. One of them said: “George, as great as he is, is seemingly on a mission to bring down farming at the moment.”

And it’s putting them in a difficult position. They don’t agree with his extreme views and it risks alienating them further from farmers. But how can they call out one of their own?

I was interested to hear an interview George Monbiot did with Charlotte Smith on BBC Farming Today on January 8th when he mentioned a “just transition” for farmers, to help them move away from agriculture. His parting words to Charlotte were, “my advice to farmers is to get out now”.

I found it crass and cruel. And do you know what I heard in his voice? A smirk. A deep sense that he was enjoying the sport.

The only time I’ve heard that phrase was when I chaired an environmental event in London recently. There were senior representatives there from all sorts of green organisations including Friends of the Earth, Greenpeace, the Food and Land Use Coalition, the World Resources Institute…I could go on and on.

These are some of the heavyweights pushing the global environmental agenda – the real influencers and string pullers. And not once in their vision of a ‘Just Rural Transition’ was an end to farming discussed.

The Just Rural Transition (JRT) is an actual thing. It’s a vision for a radical shift in food and land use systems in order to tackle climate change and biodiversity loss while protecting rural livelihoods and improving diets globally. 50 countries have signed up to the JRT, which came out of the UN Climate Action Summit (UNCAS) in September 2019.

The JRT is a road map which aims to guide us towards the Holy Grail of feeding more than 9 billion people by 2030 (yes, only 10 years away) while protecting biodiversity and the natural systems which sustain life.

The OECD (Organization for Economic Cooperation and Development) estimates that the top 51 countries that produce two-thirds of the world’s food provided approximately US$705bn a year in public support to agricultural producers.

The JRT seeks to shift this support towards “sustainable use of land, prosperous rural communities and conservation of nature”.

And how will it do that?

By supporting farmers (including livestock farmers) to adapt. Not to disappear. Not to stop producing food. Adapt.

George Monbiot is misinterpreting it publicly, on the record. He’s saying a “just transition” means moving farmers out of agriculture. Likening it to the decline of British coalmining in the 1980s (by the way, that was about buying fossil fuels cheaper from elsewhere in the world and getting other countries to mine our coal. Hardly a just, or sustainable, transition.)

He’s on the money that dramatic change lies ahead. If the JRT gathers national and international momentum, it sounds the death knell for the ‘business as usual’ model. I think we all know that’s on the way out anyway.

But the ‘end of farming’? He’s wrong and he knows it.

I spent a day discussing in great detail what a “just transition” would look like, with the environmentalists driving this vision forward. No one, not for a second, even hinted that an “end to farming” is the answer. In fact, everyone in the room agreed that farmers (not ex-farmers) are at the heart of the solution.

We’re going to hear this phrase – “just transition” – a lot in the coming months and years. It will become part of our agri-policy vocabulary, just like ‘public money for public goods’.

And I can’t stand by and see it hijacked and twisted before it’s even got off the starting blocks. I don’t want farmers to hear that phrase and roll their eyes – or worse – feel threatened. It does not mean a death spiral.

George – I see what you’re trying to do. But you risk wrecking something really good by making it sound really bad. You’re not helping the cause. You’re not selling it to the people who need to buy into it most…the world’s farmers.

Please, let this one go.