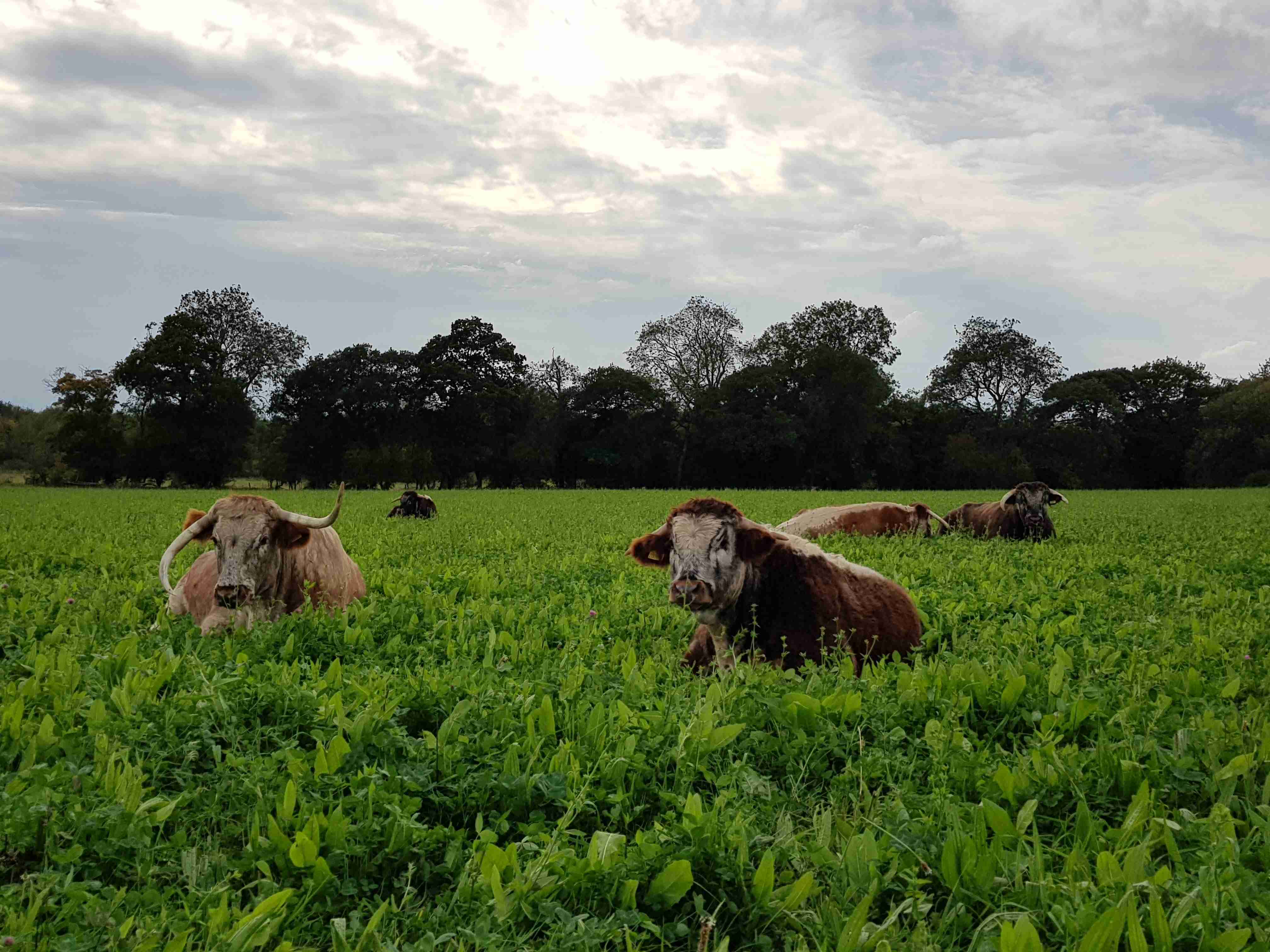 Hampton Gay farm, near Oxford, specialises in organic 100% grass-fed beef from Longhorn cows. Farmer Tim Thompson explained to me his approach to ‘grass-fed’, as well as the many other ways he looks after the land to improve biodiversity.

DH: When did you become an organic farm and what prompted you to change?

TT: We took over Hampton Gay in 2016 so it’s only been three years so far. The land agent advised us to plant arable crops because we were taking over the farm during the winter and we mustn’t leave it fallow. Traditionally people would leave fields fallow over the winter, but now it’s rarely done.

These days, if you want to grow wheat, there is typically only one way of doing it: Buy the seed from the seed merchant, spray it with glyphosate to kill any weeds before planting so that nothing else can compete, and then add nitrogen, pesticide and fungicide at various other points during the year as advised by the agronomist to maximise the yield.

“The problem is that the majority of agronomists work for chemical companies so it’s a bit like going to a doctor who works for a major pharmaceutical company. They have an interest in selling you the chemicals they produce.”

In the first year we spent £4,000 on the cost of chemicals and hiring external people to spray the fields. I was shocked by the amount of money that went on chemicals, and then I went to the Oxford Real Farming Conference (ORFC).

It was at ORFC that I met the Pasture Fed Livestock Association. Members of their association rear 100% grass-fed animals. I hadn’t even realised until then that when meat was termed ‘grass-fed’ it wasn’t always 100% grass-fed. It might take me longer to produce food this way, but the input costs are much lower.

We have a herd of Longhorn cattle and we graze them on herbal leys. This is a term for a multi-species grassland. The diversity of the grasses means that the pastures are both drought-tolerant and wet-tolerant. It also means that the cows can self-medicate, choosing to eat the types of grasses they most need when they need them.

I virtually never have to call the vet out – at least not for the kinds of normal complaints other cattle farmers would. If I spend more than one hour a day looking after the cows, there’s something wrong.

DH: What do you think caused the shift to more chemical agriculture in the past?

TT: It really started after the second world war. There were lots of chemical companies which had been set up to produce chemicals for chemical warfare. After the war these companies needed to find a new market and agriculture was the most obvious one for them to focus on.

The same thing happened with the armaments companies, who were building tanks. They turned to building tractors and other machinery. Quite quickly farm machinery was bigger and the chemicals were there to protect mono-cultivated crops and maximise their yields.

It had a fairly immediate effect too. We knew about the mass extinction of species 60 years ago when Rachel Carson published Silent Spring in 1962, but it’s only really now coming home to roost.

DH: There was a big focus on silvo-pasture (planting trees and pasture) at the ORFC this year. Do you think that would work well for your farm?

TT: Absolutely! Cows are naturally woodland animals. They’re used to browsing hedgerows and the understory of trees. I really think that the days of huge barren fields should be a thing of the past. Planting trees is a major part of my plans here at Hampton Gay.

Particularly with the Ash dieback, it will be even more important for landowners to be planting trees to replace the ones we have lost. Already the UK has fewer trees per acre than many other European countries. One farm doing silvo-pasture really well already is Smiling Tree Farm in Shropshire.

“Cows are naturally woodland animals. They’re used to browsing hedgerows and the feet of trees. I really think that the days of huge barren fields should be a thing of the past.”

TT: It’s probably the right price, but the problem is that the rural payment scheme in the UK rewards farmers purely for land ownership rather than positive environmental impact. There is nothing to deter farmers from using glyphosate and other chemicals on the land. Under this structure farmers are incentivised to farm large tracts of land with chemicals that more quickly produce a yield they can take to market.

It takes a brave man like John Pawsey to farm arable organically at scale. The time and investment required upfront to get organic farming going puts-off a lot of people, and then there’s the ongoing costs associated with organic accreditation, which other farmers don’t have to pay for. At Hampton Gay we’re still building up the herd, but once the numbers are good, we’ll be happily profitable. In the UK still only about 3% of the farmed area is organic.

DH: What do you think would encourage more farmers to become organic?

TT: It needs to be subsidised so that it isn’t more expensive. Michael Gove, the UK’s environment secretary, is planning a subsidy based on natural capital in new agricultural policy that will hopefully come into force as part of leaving the EU.

How you measure natural capital isn’t straightforward, but it will might be based on whether you have well-signposted footpaths across your land, whether you are farming organically and how much biodiversity you are contributing. This will hopefully encourage smaller mixed farms. Ideally we wouldn’t have subsidies at all for farming, but that can’t happen because the rest of Europe and the rest of the world have them, so we would be unable to compete without them.

DH: What is the difference between grass-fed and pasture-fed?

TT: In the UK, animals that are classified as grass-fed only have to spend 51% of their lives on grass. What typically happens is that they are started off on grass while young, and then spend the latter half of their lives fattening up on grain and soy. It can take twice as long to grow an animal on 100% grass than to grow a grain-fed animal. There is also a difference in the type of fat it produces. Grass-fed produces omega-3 type fat, which is much better for you than the omega-6 type fat produced in grain-fed animals.

DH: Not long ago Longhorns were a rare breed. Why did you choose to keep a herd of Longhorn cows?

TT: I was looking for a hardy native breed. My cows never go in. They stay out all winter. In some areas it’s too wet to leave the cows outdoors over the winter because they ruin the ground so that the grass won’t grow the following year, but I’m lucky in that respect. Longhorns are also a very docile breed.

“In the UK, animals that are classified as grass-fed only have to spend 51% of their lives on grass. What typically happens is that they are started off on grass while young and then spend the latter half of their lives fattening up on grain and soy.”

DH: What is the impact of the beehives you keep?

TT: Actually someone else looks after them and gives us honey in exchange for keeping them there. I don’t know too much about them, but it must make a difference to the way stuff is pollinated around the farm. I’m sure it helps to keep the herbal leys healthy. You’d hope that you’d have wild bees and wouldn’t have to bring them in. That’s how it used to be.

DH: What are you most excited about for the future?

TT: I would love to get to a point where I can pre-sell all of my meat locally. That’s how it used to be. I want to know that when I send off animal to the butcher, it is essentially all gone before it leaves the farm. That way we can feed local people with local, high welfare meat. I’d also like to plant more trees, see the biodiversity increase and the river health improve. Already we have seen quite a marked difference. I think that is due to the upstream management by the river authorities, but now we actually swim in it, whereas three years ago we wouldn’t have done that.