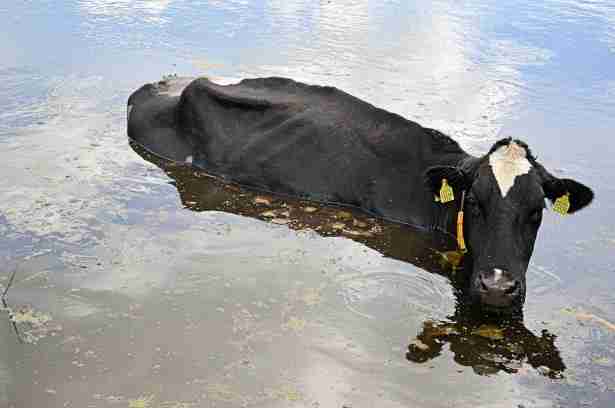 Once again, I’m astounded by the misinformation put out there about meat and water.

This week, many UK water companies, and ‘Waterwise’, a charity that exists to help better steward water, embarked on a week to raise the profile of water management. They started with #MeatFreeMonday of course.

Before we start, I am an arable farmer (I grow cereals and oilseeds) with a few sheep on farm also, but I certainly don’t produce beef. My ‘axe to grind’ is with the misrepresentation of my wider industry using barely accountable data, not a personal or business motive.

So, where were we. Oh yes…on Monday well-animated, and brightly coloured infographics, tweeted out by OFWAT, the water regulator, claimed that it took 15,415 litres of water to produce 1kg of beef. Water companies and Waterwise sent out similar tweets.

The MeatFree Monday account, meanwhile, tweeted (and retweeted by Waterwise) that it “can take 2,350 litres of water to produce 150 grams of beef,” and that was enough water to fill 30 bathtubs.

A shocking statistic – but how true is it?

Now I’m not about to argue that meat doesn’t take more resource to produce than plant-based foods (although 1g of meat protein can actually take less water to produce than 1g of protein from nuts).

Instead, I want to look at the data that produced this wildly misleading number.

As a consumer, the figure of 2,350 litres of water being used to produce 150g of beef seems huge, and at first look, I’d assume that that is what cattle drink.

There’s clearly something else going on here. So I looked at the study behind the ‘data’, and apart from it being very USA/ Netherlands/ India-focused 🇺🇸 🇳🇱 🇮🇳, and it assessing the full weight of a mature cow as 253 kg (in the UK, the average beef steer will weigh about 680kg before slaughter, of which about 370kg will result in meat), it showed some hugely misleading assumptions.

It looked at ‘blue water’; the amount of cleaned, tap water used, be that for the cow to drink, or to wash down the yard (not really required if cattle are pasture-fed).

Fair enough one might think, except that it varies by geography – the Welsh government for example, estimates that just 0.4% of a cow’s water requirements come from blue water; the rest being ‘green water’ (see more below).

I read on…it also looked at ‘grey water’, the water discharged into the sewer for cleaning and management. Also fair enough.

It then included a figure for ‘green water’, which is the water that falls on land used either for producing feed, or directly for grazing (i.e. grass) by the cow, and which may then pass through into adjacent land, water courses etc as throughflow, ground water, or runoff etc.

In farming, we call this ‘RAIN’.

This is an ABSURD measure and in no way reflects the true water cost of production.

Let me extrapolate this. It’s like saying that the water cost of me writing this post is the entire rainfall captured by my roof and garden this year.

Using the figure for naturally available water that “may or may not’” be used by the livestock in question, is like saying that the water requirement for North Atlantic Cod is…(wait for it)…the ENTIRE NORTH ATLANTIC.

By this measure, the water requirement for the Amazon Rainforest is so burdensome on our natural supply of water that we really should chop it down and be done with it.

I could not believe my eyes. This is especially so, when you add to this the fact that key livestock producing areas (in the UK, that means the north and west) are not only often too hilly to produce crops, but are also so wet that the issue sometimes is too much water, rather than too little.

The sad thing is that this jumbled ‘factoid’ is bandied about by anti-meat groups or vegan activists, then swallowed hook, line, and sinker by companies, organisations and media outlets, and then sold on to the public as widely accepted truth.

So friends, do please look into ‘data’ as best as you can. And as for water companies and the regulator, why not stick to telling people not to leave the tap running while they brush their teeth rather than getting in to bed with populist, barely accountable, misinformation.