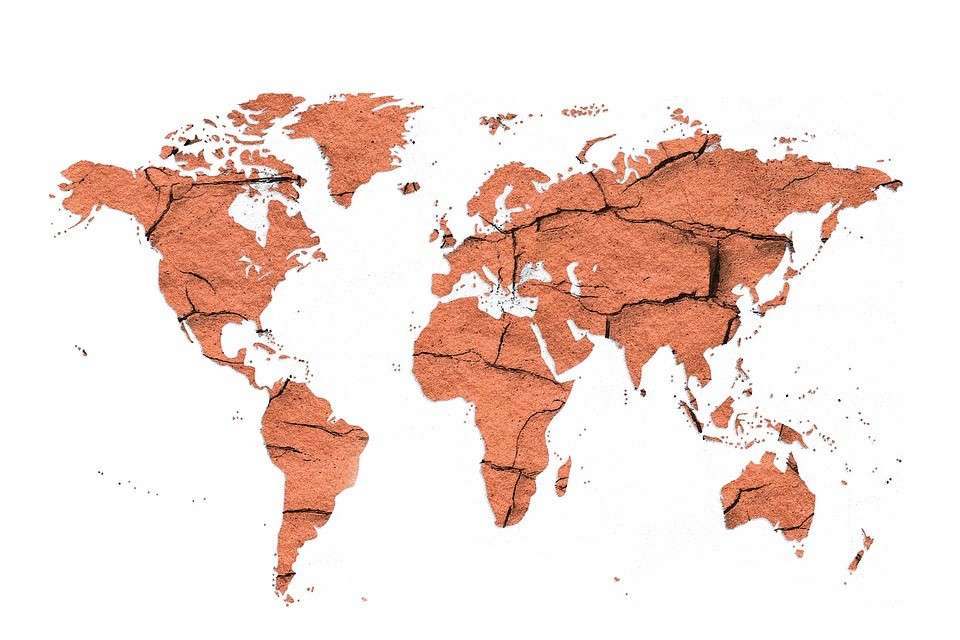 The global lockdown has sometimes felt like to the day the earth stood still. Cows continued to graze, but the earth started to recover.

‘Scientists Underestimated How Bad Cow Farts Are’ to ‘Giving up beef will reduce carbon footprint more than cars’, are just some of the recent headlines, associated with the agricultural sector that you may have read in a newspaper.

Unfortunately, there hasn’t been a voice from within the sector to counteract the opinion – probably because there was no evidence, as it is a lot easier to measure carbon output from a car vs a cow.

We were joined by the ‘Extinction Rebellion’ at the Oxford Farming Conference in Jan 2020. The climate change protesters and delegates from the conference actually had a lot in common about restoring our ecosystems and peacefully had different interactions over the course of the event.

One of the very few positive by-products of the recent outbreak of Covid-19 has been some much-needed evidence, but more importantly some very positive headlines about the earth recovering.

Does this evidence clear our name? No. Is there still more we can do as a sector? Yes.

By writing this blog, I hope it gives the key workers of our sector – farmers – a much-needed break, while they continue to feed the nation throughout these very challenging times.

But also a chance to reflect on how we can all do more.

Although images like the one below are a nice idea, it doesn’t cover all the sources of carbon output on your average farm and hasn’t been created by a ‘legal bod’ or sources cited to give it clout. 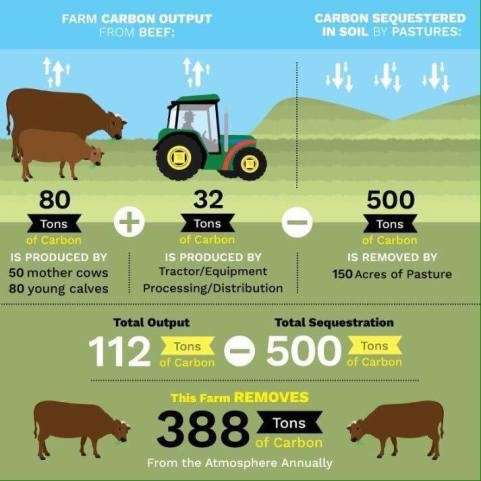 However, evidence based articles from the likes of the BBC do. In fact, the headlines are flooding in and facts like “Data collected by the National Centre for Atmospheric Science shows marked reductions in nitrogen dioxide (NO2) and in particulate matter (PM2.5)” are welcomed by all. 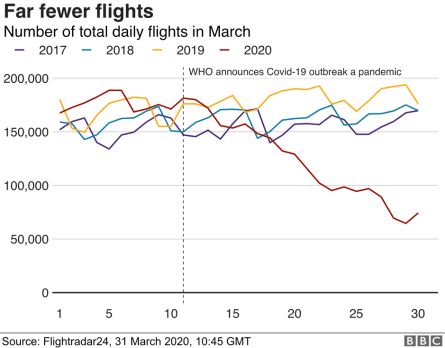 This graph above shows the significant decrease of flights in March compared to recent years. Source: BBC

On 19th March, the BBC also reported a headline that came as no surprise to the agricultural sector, “Coronavirus: Air pollution and CO2 fall rapidly as virus spreads”.

Reduced traffic to work and flying has resulted in a 50% reduction in carbon monoxide in New York alone, when compared to last year with the main source reported to be cars.

They also discovered there was a 5-10% drop in CO2 and a decline in methane as well. Although these images have been caveated to say there isn’t enough data to be ‘confident’ in the observed changes, I think we can safely associate the lack of travel and reduction in industrial activity to be responsible for the decrease in this. 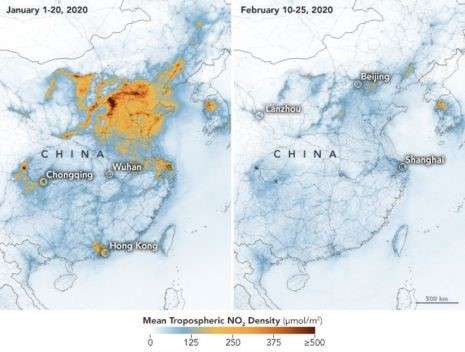 Can it be a pure coincidence that the canals in Venice are the clearest they have been for 60 years? No – with tourism grinding to a halt, the lack of boat traffic is now not disturbing the sediment and wildlife like dolphins, fish and swans have been spotted. Some endangered animals have even been seen returning to cities and towns in other parts of the world. Has nature reset? 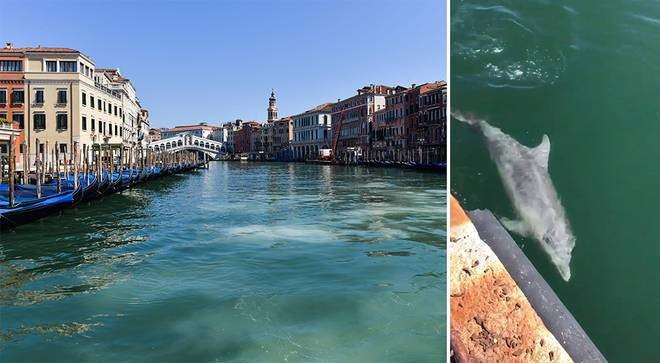 See also: What It Looks Like From Space When Everything Stops

The reason the beef industry gets hit so hard in the media is due to the increase in land and water to produce it, followed by the feed requirements like soya or maize, then the consideration we have a rising population to feed.

Of course, more land and water is required to produce beef; cows are much larger than pigs and chickens so they need more water; they need more land because they can’t be reared as intensively as chickens and pigs.

Consider some countries only allow a hen to have the space of an A4 sheet of paper. I wouldn’t choose to eat meat sourced from the farm below.

But consumers (both farmers and the general public) need to face up to the facts that they drove this due to demand.

It’s the same in the dairy sector, do you think farmers used to milk a cow twice a day and put heifers in calf all year round historically? Due to the increase in demand, the industry responded.

Now, livestock farmers are faced with poor prices from the supermarket and the more recent challenge of one of their main customers, like McDonalds closing due to lockdown.

Recently it was also reported “Methane, a greenhouse gas, is 84 times more potent than carbon dioxide and the second largest contributor to global warming.” Carbon dioxide, methane and nitrous oxide are the main by-products of beef production.

It’s part of a balanced diet and we have been eating it for millions of years. One ‘flawed’ approach in America is to get the cattle to finishing weight quicker by using hormones as growth promoters, resulting in a shorter life and emit less methane overall.

This would however require tonnes of soya and maize. Like almonds, soya is being completely over produced to keep up with the new fad diets and are the definition of unsustainable. Besides the fact that in the UK growth promoters are banned, I consider myself your ‘average consumer’ and again wouldn’t be buying a joint produced like this for my Sunday roast.

We all know agriculture is always up there as an industry alongside the transport and energy sectors as key contributors of pollution. We need both industries to reduce their impact.

Unfortunately, three out of the four agricultural revolutions haven’t been great for the environment. But we all know harvesting crops with a horse and plough wouldn’t be viable in this day and age (Revolution two: Post mechanisation post WW1). And where would we be without responsible use of pesticides and fertilisers? (Revolution three: The green revolution).

Can digital help fix farming? Farmers can already access digital tools that improve both in-field and herd efficiency and productivity. The latest and fourth revolution optimises data science and the latest technologies to work with nature more; From soil health mapping, to sensors that detect calving, to apps that scan medicines to keep farmers compliant.

Together we need to do better.

Together we need to keep up the things that have allowed the world to repair after lockdown, like meeting digitally or cycling to more places.

Together we need to keep innovating. Think of the 16,000 British and Irish farmers who supply beef to McDonalds. The closure of all restaurants amid lockdown has put many at risk. Are you going to buy a Big Mac when they reopen or stop eating beef all together?