Mammoth, silphium, passenger pigeon, ansault pear – what do all these have in common? We’ve eaten them to extinction.

The earliest humans favoured juicy, meaty mammoth at mealtimes. Ancient Romans loved their favourite herb, silphium, so much that they sprinkled it on everything from lamb to melon. In the 19th century United States, passenger pigeon pie was a cherished comfort food, long before chicken pot pie became commonplace. And, for dessert, Americans a century ago might have enjoyed a superlatively buttery Ansault pear, reckoned to be the greatest pear ever grown.

What did these foods beloved by previous generations taste like? Well, apart from some written descriptions, we’ll never know: they’re all extinct.

Join us this episode as culinary geographer Lenore Newman takes us on a tour of lost foods—and the lessons they can teach us as we fight to save our current favourite foods from disappearing forever. 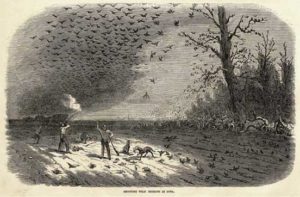 “This project started because of a bird,” Lenore Newman told Gastropod. “And that bird was Martha.” Newman’s project is a new book titled Lost Feast: Culinary Extinction and the Future of Food; Martha was a passenger pigeon and the last living member of her species—an “endling,” as such lonely creatures are evocatively called. Her death, on September 1st, 1914, represented the first time that humanity watched a species disappear, in full awareness of the concept of extinction and our role in causing this particular one.

“There was no denying it was us,” said Newman: somehow, together, we had eaten so many pigeons that we had wiped the most abundant bird in North America off the face of the planet.

But the passenger pigeon wasn’t our first culinary extinction. This episode, Newman takes us on a tour through the foods we have eaten to their end, such as the Pleistocene megafauna, which early humans destroyed as our numbers spread around the world, and the leek-flavored silphium that was so valuable its last stalks were hoarded, alongside gold and jewels, by Roman emperors.

In each case, we sift through the evidence that points to human appetite as the leading cause of extinction, and unpack the response of a bewildered, bereft humanity. 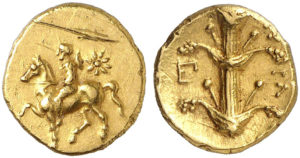 Gold coin from Cyrene, from between 308-250 BC; the tails side depicts silphium.

The Romans clung to the belief that their beloved silphium could perhaps spontaneous reappear someday; the idea that that something could be gone forever was simply, at the time, inconceivable.

The concept of extinction—along with its mirror, evolution—wasn’t formulated until the end of the eighteenth century, and it finally gave humans a framework within which to understand their actions. But, as Newman describes, the pace of culinary extinctions has only increased since then, with thousands and thousands of varieties of plants and breeds of animals vanishing in the early 20th century.

Why have we allowed so many of the foods we love to vanish? What impact has their loss had—and what lessons can it teach us for the future? Listen in this episode as Newman helps us tackle these morbid questions, leaving us with some hope, as well as a whole new perspective on chicken.