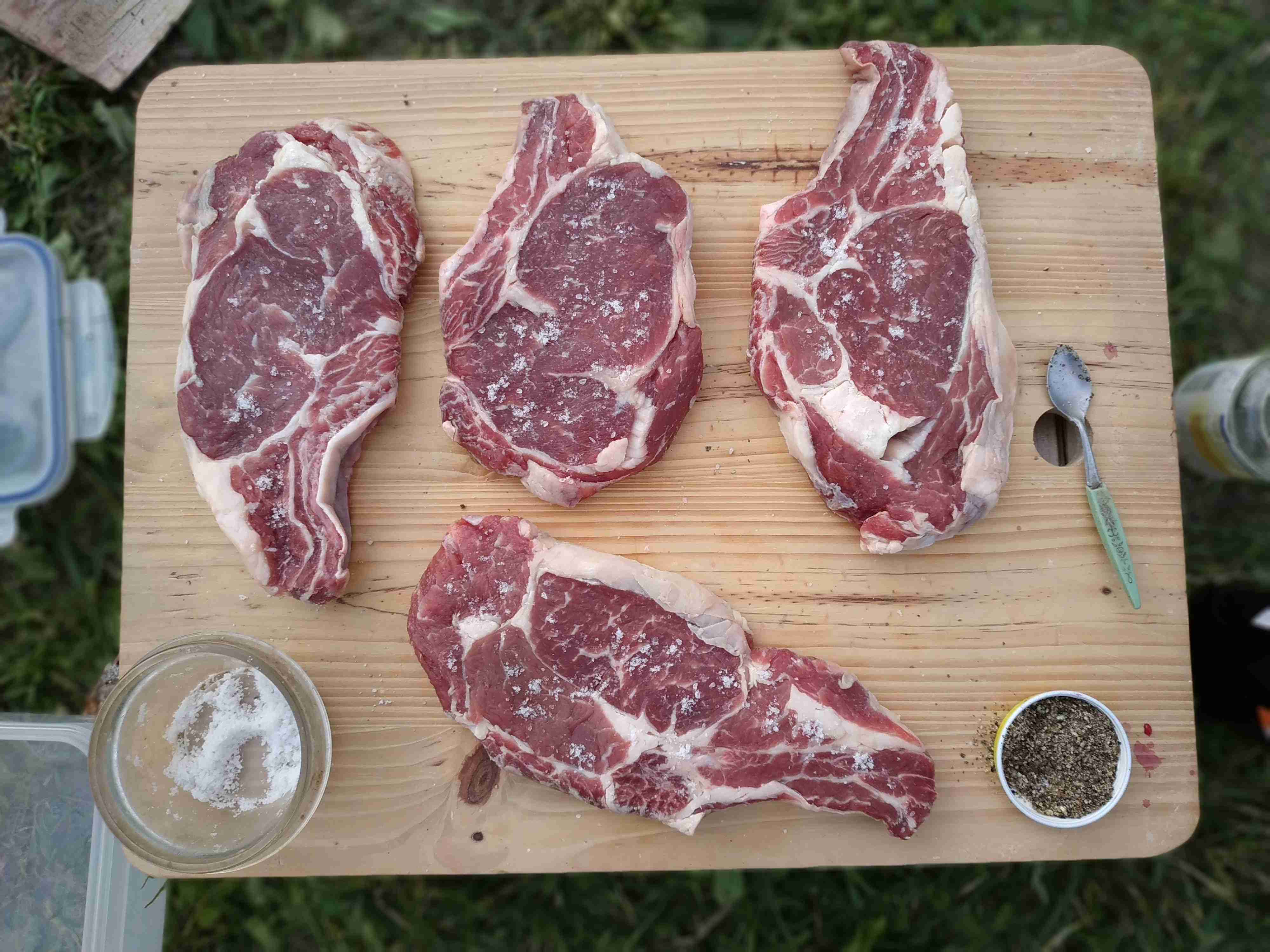 I believe that if you farm animals, and eat meat, you can’t shy away from the fact that  ultimately, the animals you rear and care for have to be killed to enter in to the food chain and get on to our plates.

I’ve eaten meat all my life (well apart from the two months I went vegetarian when I was 14), but before farming I’d never really thought too much about where my meat came from, let alone the process that happened in between having the animal alive, out in a field, to dead, and on my plate.

But now that my future sits firmly within agriculture and more specifically the farming of cows and sheep.   The process I have been so ignorant about in the past, can no longer be ignored.

So this week, when I sold my first lamb meat, from one of our home bred lambs here on the farm, I felt that it was not only important, but right, for me to follow the final journey the lamb took and watch the killing and butchery process in its entirety – ‘surely I’m a hypocrite’ I thought, ‘if I can’t!’

I have to admit I was extremely nervous and didn’t sleep well the night before the lamb was booked in to be slaughtered.  I deliberately hadn’t done any research or watched anything online as I wanted to go in to it without any preconceptions.

Yes of course I’ve seen horror stories in the press in the past but I didn’t want a refreshers course on that just before I was about to head in.  I was anxious enough about it thank you very much without any further scaremongering!

Going to the abattoir

To the set the scene, I had booked the lamb in to be slaughtered and jointed at a local family run abattoir – we’re lucky enough to have one close to us, which I know not all farmers have the fortune of as the animals are not allowed to be killed on farm.

I was advised by Margaret, my soon to be mother-in-law that this was the place to go.  She said; “they’ll also let you go in to see how it all works if you want to Nic,” and the moment she said it, I knew that’s what I was going to do.

‘How’s that for transparency!’ I thought, so impressed that they would let me do that.  It immediately filled me with confidence in how they operate and treat the animals.

The morning of the slaughter, I was up early and met Margaret out in the yard to load up the lamb.  We ran all of the sheep in to our handling pen.  Separated out the lamb we needed and Margaret slipped a halter on him so that we could load him in to our vehicle.

If I’m honest it all felt quite sinister, I suppose it was really, but with lots of care (because you don’t want to bruise the meat or distress the lamb,) we lifted the lamb in to the back of our truck.

We then made the drive to the abattoir and unloaded the lamb in to a holding pen at the other end.

My first impression of the place was how rural and strangely beautiful it was.  The abattoir we used is in old farm outbuildings – ones like we have on our farm so it felt familiar and in some ways personal and the people who met us when we arrived were normal too – like me or you, and really friendly and reassuring.

I was given white overalls and a cap for my hair, disinfected my boots and then in to the abattoir I stepped. 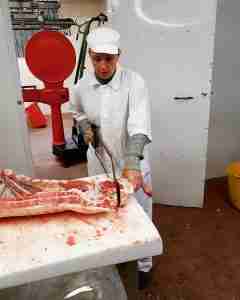 The first thing that struck me was the smell, it was pungent, not like any other I’ve smelt and it’s difficult to describe.  I shuffled in to the room a little further not sure what to do with myself and was faced with animal carcasses.

Two men were working on cattle heads.I nearly turned around and left, but then one of the men spoke to me.  He was the meat inspector – a man called Chris whose job it was to ensure all of the carcasses and meat was healthy and not diseased so he could approve it to go in to the food chain.

It was as normal to him as it would be for me to tell you what I had for breakfast which strangely puts you more at ease.  He genuinely took pride and care in his work and enjoyed sharing that with me.

I told him this was my first time in an abattoir and why I was there.  I also said that I was very close to walking out the door and was it OK for me to leave at any time.

He replied to me “if you were going to leave you would have done it already.”  I was so thankful for that comment as he made me believe in myself. And I stayed.

So I took a deep breath watched as the men in the abattoir finished removing the hind from the cow who had been slaughtered.  They then cut the carcass in half at which point the meat inspector took a look to approve it.

Another man came over to me and said “we’re going to kill your lamb now.  Are you coming to watch?” Again I nearly chickened out, “I’m not sure I can,” I said, genuinely feeling quite queasy and faint.

“You’ll be alright darlin’ ” he said, “it’s very quick and if you pass out I’ll catch you!”

So I followed him across the room to the run where the slaughter would take place. “Stand there,” he said, so I did.  I couldn’t believe what I was doing but adrenaline took over and I stood and I watched.

The man who did the killing shot the lamb in the head with a bolt gun that goes 8cm in to its brain – making it brain-dead instantly.  It’s not a loud bang like you’d expect and happened very quickly.

Then the man who had assured me I would be alright,  picked up the lamb and hung it up by by its legs, before quickly slitting its throat.

At this stage the lamb was still moving, kicking its legs and I asked the men if the lamb was dead.  They said that it was brain-dead and would be dead in seconds, which it was.

I honestly thought that once it had been shot, the lamb would be dead instantly, so I was surprised to see it still moving.  The men explained to me how if anyone was shot – there would still be movement as the energy leaves the body.

“It’s not like how they portray it in the movies” he said “when they’re shot and then just lie down dead and don’t move!”

I took his word for it.

Before I witnessed the slaughter, I had assumed the lamb would be stunned but they explained that they prefer to do the shot as it’s more efficient.

The dead lamb was then moved around to the next man whose job it was to remove unwanted parts, such as intestines, before moving it to the next man to take off the fleece and the skin.

It was a well-oiled process and I couldn’t believe how quick, professional and efficient it was it. Within no time the image turned from a dead lamb hanging on a hook to a carcass of meat – an image we’ve all seen a million times before and are more comfortable with.

The meat inspector went through everything with me and complimented me on the quality of the lamb.  It felt bitter-sweet, but I was proud of what we had produced and my thoughts turned towards the families who would be the recipients of the meat and it felt good to know they would be receiving a good product.

The  lamb was to be hung in the chiller for three or four days before being jointed and the butcher who was responsible for this final part of the process  invited me to come back in to get involved with this too.

So I left the abattoir with Margaret, not quite sure how to felt about what I had seen but proud of myself for going in to witness it.

Having had more time now to reflect on the experience, I can’t say I enjoyed it, but I learnt so much and I’m really glad I did it.

I was reassured meeting the people behind the abattoir who like us farmers really took pride and care in what they did and clearly had a lot of respect for the animals – in life and in death.

Let’s face it; death is never easy to come to terms with and it’s even harder when it feels like it’s something that is within your control. It does play on your conscious and upsets you, so I can understand why a lot of farmers distance themselves from this part of production.

But I  feel strongly that education/knowledge is really important as most people (myself included) haven’t got a clue.  I take my hat off to this local business for being so open, accommodating and willing to let people in.

The man who did the slaughter said to me; “You see so much bad press around the slaughter of animals, and  it’s just not true. There is of course always the danger of human error where an animal may turn just at the wrong moment and get injured instead of being brain dead, but there is a loaded gun close at hand so that the animal can be shot to prevent any suffering and the times that it happens is very rare.”

I respected his honesty and completely understood.

Has the experience put me off meat 0r farming?

No, it’s just made me even more determined and driven as a farmer to provide meat to people, who share the same values as we do.

People who respect the meat they eat, want to know where it has come from and how the animals have been treated at every stage of the process – something which factors highly in my purchasing decisions too.

It’s our responsibility as farmers to be responsible about what we do and build trust with the consumer.

So if there’s anything more you’d like to know about my experience at the abattoir or what we do here at Trefrawl Farm, or if you’ve had a similar experience you’d like to share, I really would love to hear from you.