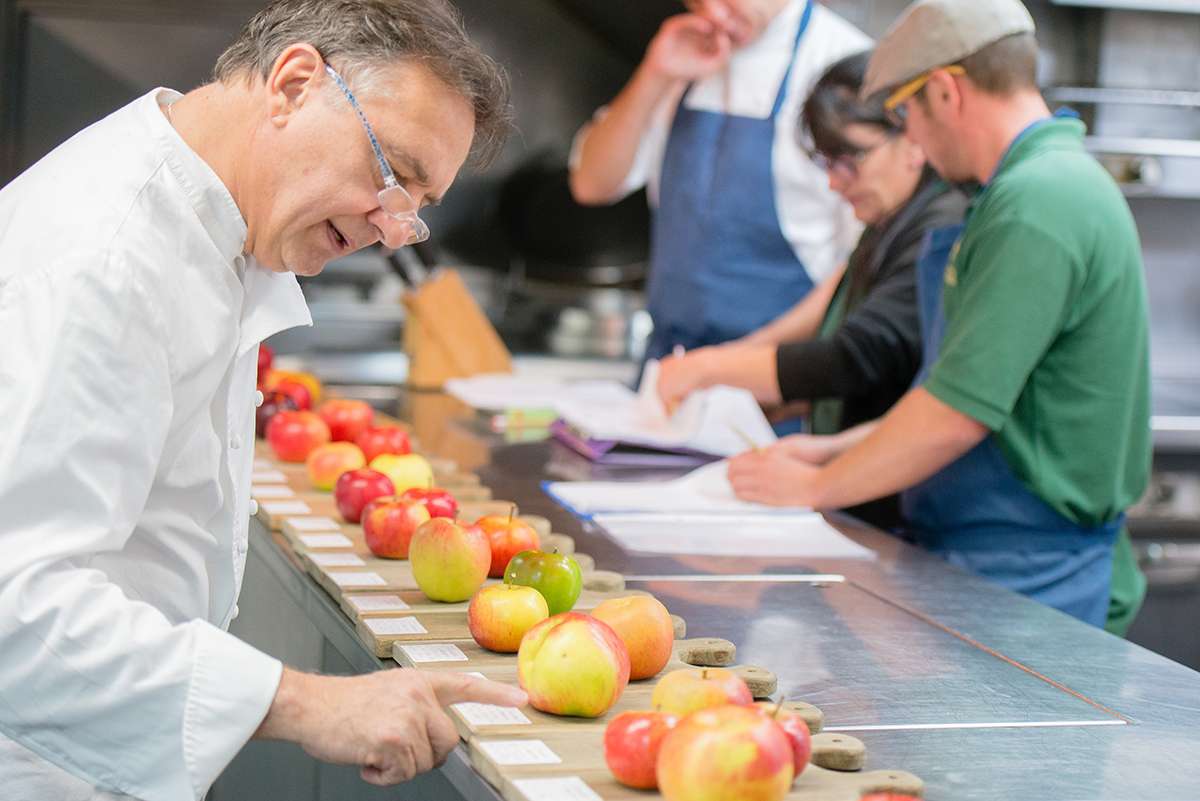 The prices at Le Manoir, Oxfordshire, might be out of our range, but we did find a highly enjoyable way of visiting for just £30. The hotel offers tours of its garden with tea or coffee and biscuits thrown in afterwards, and we were delighted to find our tour guide was the head vegetable gardener himself.

John estimates that the hotel would need 300 acres covering a wide variety of different climates to be fully self-sufficient. Ultimately you can’t prevent chefs from using vanilla in their pastries, he explained, and the first thing he does when any chef says they are fully self-sufficient, is open their freezer and pull out the vanilla ice-cream!

There are hundreds of different varieties of herbs and vegetables packed into this garden, all carefully selected for their flavour. The herb garden includes fragrant lemon verbena, which is miles better when it’s fresh, and myrtle, a herb with an aroma like eucalyptus, largely forgotten in today’s kitchens. (For more on forgotten herbs and herb gardens, see my interview with Judith Hann.)

Not only that, but the vegetable garden at Le Manoir is Soil Association organic accredited, which means they don’t use chemicals to protect the crops. It also means a lot of extra work for John.

The Soil Association come and visit once a year to audit the garden by taking random soil samples, but throughout the rest of the year John has to provide clear records of exactly what is planted where, the first harvest date and the yields they produce.

For a farm that focuses on growing a large volume of a limited number of crops, this record-keeping is fairly manageable, but for a garden with hundreds of different varieties, John’s record-keeping has to be absolutely exemplary. I don’t envy him that task!

We started in the ornamental part of the garden, where John explained how Raymond had softened the edges and the colours of the formal rose garden that had been there before to create a more relaxing atmosphere, filled with purple lavender, curving paths and rounded yew hedges.

The lavender is used in the cooking too, and at certain times of the year John has to keep a watchful eye out for chefs, who like to shave off patches with a kitchen knife.

Right now, though, it’s mostly just the bees that are enjoying the lavender. They had been planning to start their own hive this year, but those plans have been postponed until next year due to COVID-19.

Following along the lavender path we went through an archway towards the orchard. Featuring 136 different varieties of French and British apples, the orchard was neatly planted in rows and split between a section for preserving British heritage varieties, and the apples chosen specifically for their taste and texture.

The apples in the taste and texture section were selected from 33 varieties that had all undergone a highly rigorous process of being cooked and assessed in different ways.

The Christmas Pearmain was one of the selected few. It’s a storage apple, and when it’s first picked it’s very sour, but over time the sugars break down and by around Christmas time is an excellent cooking apple with mince.

From the orchard we circled back towards the house and entered the vegetable garden greeted by a parade of flowering artichokes. I’d never seen an artichoke flower before, most probably because you can’t eat them after they’ve flowered, but they are spectacular – definitely worth letting a few of them go over.

To get the most out of the garden organically, some plants are protected from birds and butterflies with netting, while others are grown with companion crops. The sprawling squash, for example, often hides its flowers beneath its own growth of leaves, making them less easy for pollinators to spot. To attract the pollinators John has planted tall, bright sunflowers between them.

I asked John which vegetables he would recommend growing in my own vegetable garden based on two criteria:

This is what he recommended:

Swiss chard – it’s easy to grow and only really suffers from slugs. Nothing else seems to get it. You can tear off individual blades and it will keep growing.

Sea kale – you can eat the tender shoots like asparagus, the flowers taste of honey, the young leaves like spinach and even the roots are edible, although it’s a perennial plant so you probably want to leave these in to grow more for the following year. Birds and cabbage white butterflies do get to it though, so it’s best to grow it under netting.

Carrots – grow the more unusual varieties. Paris Market round carrots are early season carrots so can be grown first and then followed up with mid-season carrots like Early Nantes, Yellow Stone, Cosmic Purple and White Satin. The White Satin carrot is the most flavoursome of all the carrots according to John, but many people are tricked into thinking it doesn’t have much flavour because it’s a white carrot.

French breakfast radishes – very crisp and mildly spicy, these are perfect for dipping in salt and butter

Delicata squash – this is a winter squash, smaller than butternut squash and slightly sweeter, but with a delicate skin which means you don’t need to peel it.

Beetroot – the Detroit and the Italian Chioggia varieties are the best. The Chioggia’s pink and white bull’s eye cross section looks spectacular on the plate.

We spent so long chatting to John, that by the end of the tour we were already running late and unable to stay for the tea and biscuits, so the staff at Le Manoir very kindly offered them to us as a takeaway.

I had an excellent Mariage Freres Lapsang Souchong brewed to perfection and the biscuits were soft and spongey and absolutely divine.