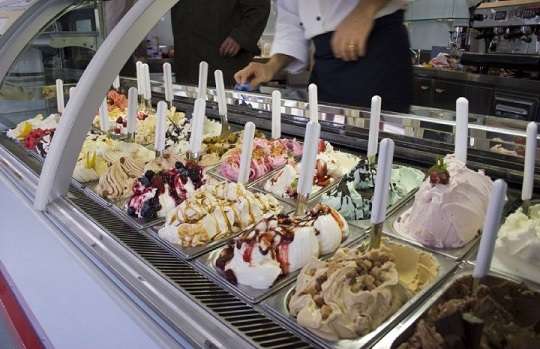 I can’t say I’ve ever really thought of Anglesey in Wales as being a must-visit place for ice-cream. But after this interview, I designed an entire holiday around visiting the Welsh island to taste one from Red Boat Gelato. I’m clearly not the only one either…

“Delicious ice cream, some of the best I’d ever tasted – rivalled that sold in Italy! We’re not local, unfortunately, but I would visit Anglesey again just to sample the ice cream!”

Tony Green really knows his stuff, and what most fascinated me was the difference between gelato and ice-cream. It’s not just a question of language –  the Italians clearly do things differently.

I was born in Liverpool and moved to Wales in the late 80s. I know it’s not exactly Italy, but I liked ice-cream, and to begin with that was the only connection I had with it.

I knew that some ice-creams tasted better than others, but I didn’t understand the science behind it. We were inspired by a trip to Italy when we first tried gelato and realised just how amazing it was compared to the ice-cream on offer in the UK.

After looking around we decided that Beaumaris on Anglesey was the best place to open the first Red Boat, due to its beautiful location overlooking the Menai Straits and the mountains of Snowdonia. It all also offered tremendous footfall due to the many historical buildings and beaches.

We started looking around and found the perfect place in Castle Street that ticked all the boxes. It quickly turned into a bit of a money pit though, but, like a plane taking off, you have to finish it to get your money back. 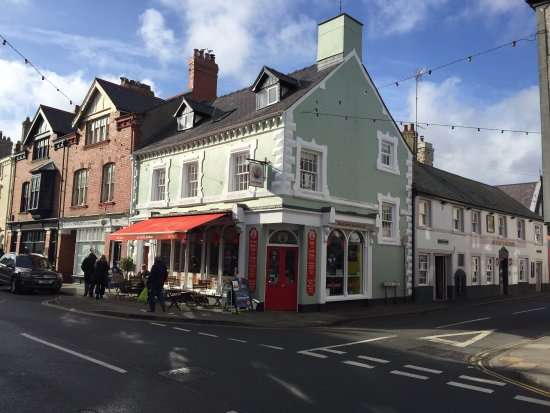 We had a ridiculously small production area. In gelato terms this is called a lab, because it’s quite a scientific process. Every time you add an ingredient, you need to make sure it balances out with everything else.

It was actually through our equipment supplier, Carpigiani, that I was first introduced to the science of gelato making. Initially I spent some time in their UK premises, but it wasn’t long before I decided to go for the real deal and head out to Italy to train at the Carpigiani Gelato University near Bologna.

The gelato chefs there were so passionate that I couldn’t help but let that passion rub off on me. I learnt so much from them and came back full of enthusiasm and excitement for the future of Red Boat Gelato.

I didn’t want to continue with continuous production (the way that ice cream making is typically scaled using a concoction of powders instead of milk and cream). I wanted to do it the artisan way, but do it at scale.

The style of gelato we produce doesn’t work with continuous production. It makes us more expensive, but so much more flavoursome. Slowly we’ve won over the hearts and souls and palettes of the local people.

So what is the difference between gelato and ice-cream?

It all comes down to the fat content. Ice-cream typically contains 17-18% fat compared to gelato which contains 8% fat. Some ice-cream producers use either a large percentage of double cream, or purely double cream.

A lot of consumers think this is a great idea as they expect it to be a superior eating experience. It isn’t – the fat coats the taste buds and prevents the full impact of the flavour getting through.

To achieve a lower fat content, gelato chefs predominantly use whole milk with just a little double cream. It is still a perfectly creamy product but doesn’t prevent the flavours coming through so in fact the flavours are more intense.

It is also easier to experience the flavours of gelato than ice-cream because gelato is meant as a scooping ice cream so it tends to be served at -13C while ice cream is served at the cooler temperature of -18C.

The reason for this cooler temperature is that many ice-creams are made with a concoction of powders that would be unstable at warmer temperatures and also because the over run is often so high that it would reduce very quickly if allowed to melt.

And what makes Red Boat gelato so special?

Well, to start with, we use real fruit in our gelato. We boil down fresh strawberries to make our strawberry ripple, for example.

But the other thing we do, that most people wouldn’t think about, is reduce the over run. Both ice-cream and gelato have to introduce over run. This is a natural bi-process of churning ice-cream – a bit like folding the air into a chocolate mousse to create the desired texture.

A high over run means a high air content. Cheap ice-cream is often 90% air, while we aim for only 30-40%. If you were to melt them down, the cheap ice-cream would reduce by about 50%, while ours only reduces by about 30%.

Because air has water in it, too much air is often the cause of water crystals in ice-cream, which gives it a slightly rough texture. If you taste this, just throw it away!

Too little air is also a problem though. You need just enough to get the texture right. It should be perfectly smooth. 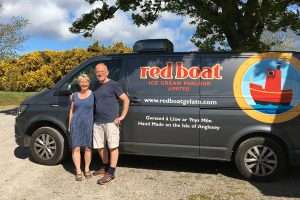 What are the cultural differences between the Italians and the Brits in their attitudes towards ice-cream/gelato?

The Italians respect it more, because they know more about it. In the UK people sometimes query our prices, but once they understand the ingredients and love that goes into it, they realise it’s worth the extra 50p and want to savour it.

How do you develop your flavours?

People would say “could you make Bakewell tart ice-cream?”, but rather than buying Bakewell Tart to put in the gelato, we deconstruct it and then recreate it from the ingredients up.

For weddings, we ask the bride and groom what their favourite cocktails are. We then find out the ingredients and reconstruct our own gelato version. Invariably we end up making a gelato that is so much better than the original cocktail!

We also work with chefs to create gelatos that complement specific desserts. Locally I’m known as Willy Wonka because of all the crazy flavours I come up with. One time we made waffle, maple syrup, caramelised pecans, and crispy bacon ice cream. People were very dubious about the idea, but it sold out within hours!

Other quirky flavours include apple and stilton, and strawberry, mascarpone and balsamic vinegar. We once made a Christmas Dinner trio of flavours: Mulled wine sorbet, traditional roast dinner (including crispy roast turkey) with sage and onion stuffing gelato.

For the gravy I used a special chocolate sauce which froze in contact with the gelato. This was followed by christmas pudding and brandy sauce.

And to celebrate a local famous seafood festival, I made a gelato with a fish sauce in the background and rippled through various shellfish!

How have you managed through lockdown and what are your plans now?

At the start of lockdown we gave away ¾ metric ton of ice cream to hospitals and hospices in Wales, but after a while we thought we should find a way of making some money and so we started selling party boxes including ice cream toppings.

These have now fallen off because we’ve been able to reopen our parlours. Our latest project is our new range of mini pots which are selling through major retailers. It’s easier for people to buy them to take away when they’re this size. You can’t really do that with a full Napoli!