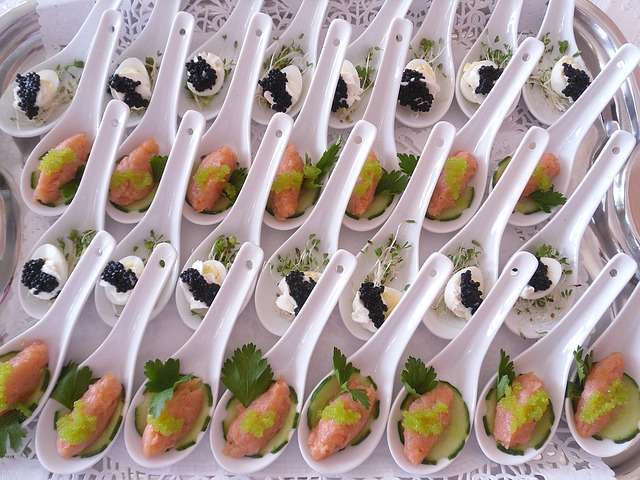 From sustainability to whether you should serve it off your own hands, there’s more to caviar than you might think. Domini Hogg investigates…

What exactly is caviar?

Caviar is the eggs of the sturgeon (the Acipenseridae family).

What does it taste of?

In 1000 Foods To Eat Before You Die, Mimi Sheraton describes it as

“…those tiny, glistening, black-diamond beads that lie silky-soft on the tongue, exuding a mysterious essence of deep, dark sea salt with a vague patina of fishiness and the merest hint of earthiness….In truth, what caviar tastes like is caviar.”

If you’re eating caviar in the USA it will be saltier because borax, used in Europe as a preservative, is banned there, and salt is used instead.

Equally, caviar in vacuum-packed jars will have been pasteurised and additional salt added. The pasteurisation process involves cooking, which changes the texture of the delicate beads. Be very wary of anything which does not require refrigeration.

How should you store it?

Keep it in the coldest part of your fridge (bottom back usually) ideally at temperatures of between -2 and +2ºC. No need to worry about it freezing due to the oil and salt content.

Once opened you should keep it in the fridge and eat within a couple of days (once you have taken some out of the tin, some of the remaining eggs will break, and their oil seep around the other eggs…not ideal, also the eggs will react with the air).

How to check that your caviar hasn’t gone off

The eggs should be shiny and glistening…not wrinkly. They should smell of fresh sea air…no musty notes. There should be no liquid, just the perfect, round, unbroken eggs.

Is there a season for caviar?

Fish caught in cold waters has the most flavour. But it takes about six months for the roe to reach market. So, technically, the best time to buy caviar is in the spring or summer, although these days when most fish is farmed it tends not to make that much difference.

When first harvested the eggs have a sort of elderly yoghurt taste (not too nice). Then salt and borax is added and the caviar begins to mature, in the same way that wine, cheese, and dry-aged beef does.

Again, like a cheese, it’s turned regularly for up to 18 months. In the UK we like more delicately flavour, matured over three to six months. In France and the US they prefer a stronger flavoured caviar matured over a year.

Post 1990s, after the collapse of the Soviet Union, poaching and pollution pretty much destroyed sturgeon stocks in the Caspian sea. In 2006 the Convention on International Trade in Endangered Species recommended a complete ban on fishing for sturgeon in the Caspian and the export of caviar.

The Caspian sea is bordered by Iran, Kazakhstan, Russia, Turkmenistan, and Azerbaijan. Since then the ban has been lifted, and specified amounts of caviar for each country to export have been set out.

But fishing wild sturgeon is certainly not the way to go, so farms have proliferated in the USA, France, Bulgaria, Britain, Italy, Israel, Saudi Arabia, Madagascar, and most successfully in China, which now accounts for 60% of the world’s caviar market.

To find out more about how it is being ethically and sustainably produced in the UK, go to the KC Caviar website.

This is a natural product and varies according to the fish, the season, the weather, and the processing. Like wine, given the right conditions an Oscietra caviar could be better than a poor quality beluga – in fact some connoisseurs prefer it anyway.

The three main types are:

There’s a general agreement  – not unanimous, mind – that the best type comes from the Iranian-Russian controlled Caspian sea, from the endangered beluga sturgeon (huso huso).

For a variety of reasons (environmental and political), its import into the USA is banned. The eggs of the beluga are the largest, roundest, and most succulent, perhaps thanks to this omnivorous fish’s protein-rich diet.

The quality of these precious eggs is gauged by the colour, crystal-grey being the best, and allocated ‘000’ grade. The darker the shade, the fewer the zeros.

Oscietra is often a golden brown hue, but sometimes it’s a dirty ivory or green. It’s smaller and slightly softer than beluga, with a nutty, complex flavour, and mellow aftertaste.

It’s less creamy and more fishy tasting than beluga. Some connoisseurs prefer it. The oscietra sturgeon (Acipenser gueldenstaedtii) is omnivorous and also has a habit of escaping from predators by diving into the seabed – you are what you eat as they say, and the oscietra type can be rich and interesting.

Wendell Steavenson, writing in The Financial Times, describes it as follows:

“The ossetra had a softer texture but a more complex taste [than daurenki and baïka] of dark velvet sea under moonlight, and something else, curious and indefinable.”

“The tasting revealed how varied caviars could be, depending on breed of sturgeon, season and feed. If my memory is correct, Oz Clarke and I decided Chinese Oscietra from a spring-caught fish, was the most complex and satisfying of those on show.”

Oscietra caviar – because this was made in the summer (and extracted only about a month ago), the water wasn’t as clean, and it tasted a bit muddier. But, I thought, in a good way…like ruffled bed-hair is rather nice!

Sevruga caviar, from the sevruga sturgeon (Acipenser stellatus) is the least rare of the three, with smaller eggs than the beluga and the oscietra. It’s also graded by colour but it is usually jet-black. In terms of flavour it’s more in-your-face and strongly sea-salty.

Sterlet caviar is rare, and mostly only consumed, in the past, by royalty. It has small golden pearls.

Produces the second largest eggs after the beluga, taut and bursting – you almost have to resort to biting (cardinal sin). Eggs are glossy light to deep brown or golden in hue and come from the Huso Dauricus sturgeon, indigenous to the Amur River of China. Most is made in China. It has a sophisticated, strong, bright and fresh taste.

This type is from the Acipenser baerrii sturgeon. It’s silky, pure and refreshinG, without so much of an aftertaste.

This type comes from the acipenser transmontanous (a close relative of the oscietra) from the eastern Pacific Ocean. Much comes from California, with some being farmed in Italy. I found it mild, creamy and buttery.

Then there is caviar produced from hybrid fish – these fish are bred to grow to maturity much more quickly, and therefore reduce the cost of the caviar…

Caviar made from the eggs of a hybrid of the huso dauricus and Acipenser schrenckii. Larger, tauter eggs than the baerri, with a rich umami taste.

Caviar from a hybrid of the gueldenstaedtii with the Acipenser baerrii. Dark grey to ebony with intense hazelnut notes. At The Rivoli Bar in London’s Ritz Hotel they pair this caviar with Absolut Elyx vodka.

How to serve caviar

LICK IT OFF YOURSELF

Traditional purists insist that caviar is served best as simply as possible. Put a dab on the crevice between your thumb and index finger and lap it up appreciatively.

HOW MUCH DO YOU NEED?

You need at least three spoonfuls: The first to calibrate your taste buds; the second to develop a growing awareness of the scent of the sea, the soft texture on the tongue, and the flavour; and the third to enjoy the whole pleasurable experience just for what it is.

Do not, of course, try to bite the eggs – the whole point is for them to melt in the mouth, just as chocolate does! The reason why you need to really focus as you experience that second spoon is best described by Alexandre Petrossian, owner of the eponymous New York restaurant, who is quoted in the Serious Eats website saying;

“They say that a good caviar should have at least 15 different flavours in it,” he starts. “Each time you take a bite, you should taste something new. It should develop on your tongue and the aftertaste should linger for a very long time.”

Three or four minutes before serving take it out of the fridge and open the tin to allow it to breathe and reach room temperature.

WHAT TO DRINK WITH CAVIAR

If you need a drink, then take a sip of cold vodka, or champagne. Mark Addey, managing director of KC Caviar, says that Brian Copeland, private client director of Remy Martin, suggested pairing it with his company’s legendary Louis XIII Cognac, and it was an astonishing success!

At the Rivoli Bar in London’s Ritz hotel they pair caviar with vodka. Beluga caviar is served with Beluga Gold Line vodka.

Ensure the dab of caviar is transported onto your bare flesh on a non-metallic spoon…mother-of-pearl is traditional, but there’s always glass and plastic.

On the KC Caviar site we discovered that most metals (yes, including gold they say) react with caviar to change the taste, although it is possible to use plain old stainless steel.

What to eat with it

The less sensuous eater may allow himself plain, thin, unbuttered toast, or blini.

The less purist eater may consider adding food without a strong taste, suggests quality caviar provider, Attilus,  – potatoes (mashed, new, all types), boiled eggs, or scallops are all candidates. Lemon, onion, and capers, on the other hand, can be overwhelming.

However, many chefs today are, thank heaven, inveterate experimentalists. Here are some caviar concepts currently on offer:

“…if you place the chocolate and caviar disc on the tongue, close your mouth and leave to melt. As the chocolate melts, the caviar flavour comes through gradually. You will be amazed by the pleasure of the changing flavours and sensations.”

“This soothed me into a first course – more a canapé in terms of quantity – of a thing called a ‘sour cream and onion Puffini’. This is a sort of collapsible panini, in that it looks like a panini and it collapses as you pick it up. I did love it, though, with its salty bits of caviar, and a dip of frothy sabayon custard.”

“Under cover of the clinking of water goblets and silverware and bone china, I paved my plate with chicken slices. Then I covered the chicken slices with caviar thickly, as if I were spreading peanut butter on a piece of bread. Then I picked up the chicken slices in my fingers one by one, and rolled them so the caviar wouldn’t ooze off and ate them.”

Anything else we should know about?

Lana Citron, in her fascinating book, Edible Pleasures, tells us;

So far, in spite of concerted effort (!) I have not been able to substantiate the aphrodisiac claim.

She’s also the founder of Tried and Supplied, an open platform that helps foodservice buyers find more sustainable, local produce, and a member of the Sustainable Restaurant Association.

Listen to more of Domini’s podcast, and read her interviews and articles here.