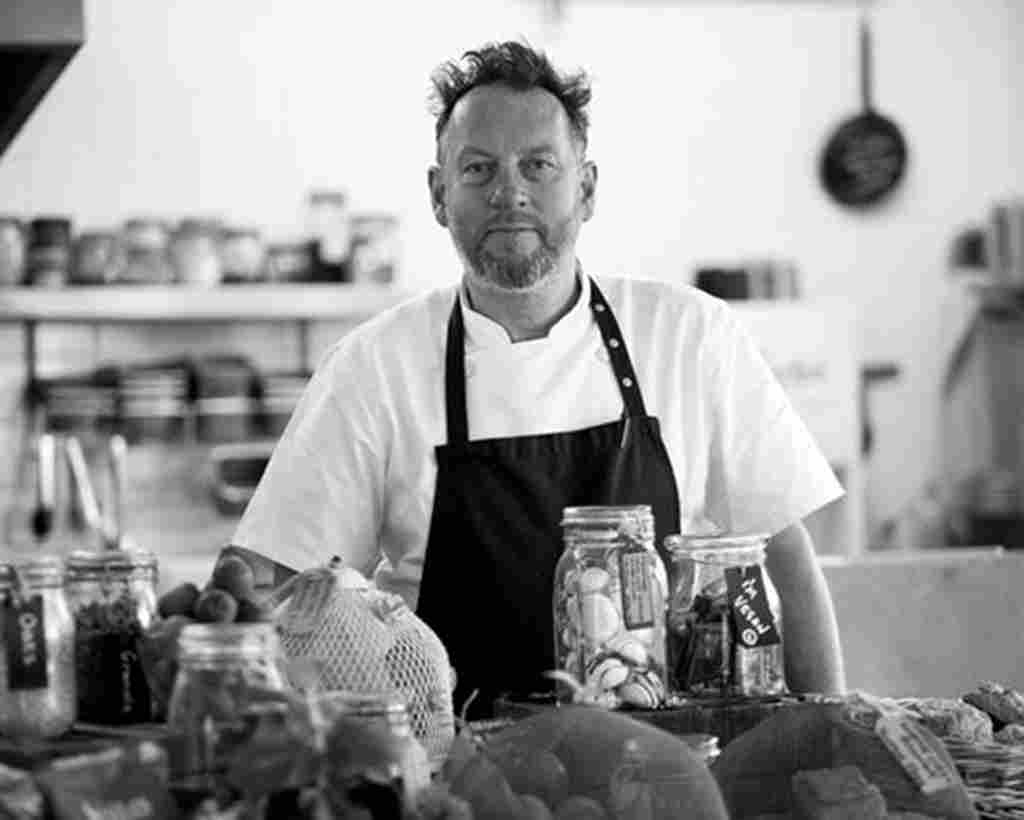 Café ODE might sound like an unassuming place, but as a three time winner of the highest Sustainable Restaurant Association (SRA) award it is in fact a formidable bastion of sustainability.

In Café ODE’s first year of opening it scored 94% with the SRA making it the highest-scoring sustainable restaurant in the UK and it still holds the prestigious 3 star rating with the SRA today.

Its owner, chef as Tim Bouget, is well-travelled and passionate, and Devon is lucky to have attracted him. But then who can blame him when presented with the stunning coastline, long sandy beaches and fantastic fresh produce around Teignmouth?

And, of course, being Devon-born, it’s always been home for him.

I caught up with Tim on how it all started and his approach to making Café ODE both sustainable and profitable.

View from the terrace at Cafe ODE

SD: It’s an unusual name Café ODE. Where does it come from?

TB: At the time we were setting up our first restaurant in 2007  it was fashionable to call restaurants by their street address.

We liked the idea of our name being rooted in our own location, as that tied in well with our ethos of local sourcing, but we wanted to do something a bit different so we went with the end of our postcode instead: 0DE. It was then easy to change this into ODE and pronounce it ode.

TB: Well, we actually started first as a fine dining restaurant back in 2007 called simply “Ode” in a three storey Georgian townhouse, which we renovated and restored with a sustainable focus.

We were recommended in the Michelin guide and scored 6/10 in the Good Food Guide before serving its last meal in 2017. We wanted to cater for the more casual local market; people coming off the beach with dogs and children looking for somewhere less formal to eat.

In 2012 Café ODE was born. Although the original ODE is no longer, we still host fine-dining pop-ups at the café a regular basis.

SD: You’ve trained in Michelin star restaurants around the world. How has this training helped you?

I was lucky enough to train alongside Michel Roux at The Waterside Inn, Bray for two and half years and went on to work in some of London’s world class restaurants.

The Michelin-star training teaches discipline, technique, the importance of different cuisines and ultimately makes you an excellent cook. But it was while living in London that I got tempted to move overseas. I was offered a job in Sandy Lane, Barbados and decided that was definitely the way to go.

This started a whole career in hotel openings and pushed me more into the managerial side of food and beverage. I opened hotels in Africa, Asia and the Middle East.

A lot of what I learnt from a business perspective and from a build development perspective during time came in useful later on at both ODE and with Café ODE.

But more than that, I picked up flavours and cooking techniques from all round the world and learned different styles that have been hugely valuable and influential in the style of the more casual Café ODE.

SD: Did you start your idea for ODE from scratch, or build it off ideas you’d seen on your travels?

TB: Mostly what I was able to use was on the build side. I learnt a lot from an organic restaurant project I worked on in Los Angeles. In the end the restaurant did not open because we couldn’t find a site. But the process taught me a lot about concept, build, recycling, upcycling when furnishing a restaurant and sustainability in general.

Shortly after I was approached to open a major hotel in Asia doing the same kind of thing also with a focus on healthy, plant-based and spa cuisine. The exclusive resort in Bali also had a similar holistic approach and gave me the opportunity to learn about integrating renewable energy into the build.

When the council-owned stables came up on sale in 2011 very close to our restaurant in Shaldon, we put together a plan for an eco-café with a focus on sustainability, offer casual dining and would be family friendly. We planned for renewable energy through solar and even an electric car charging point, which was unheard of at the time.

More recently some of the vegan recipes that I developed for the restaurant in LA 15 years ago are coming in handy. Our vegetarian menu was only 10% of our business when we started, but it really picked up last year and we’re able to bring out some of the Californian recipes we developed. Now plant-based dishes take centre stage on our menu.

SD: How much does sustainability draw customers and how much do you do it just because you know it’s the right thing to do?

TB: I’d like to think it was about 60% of customers that come because of our sustainable beliefs and great food and service. Some, however, I’m sure stumble across us after visiting the beach and it’s a convenient location  next to a car park.

We try to reward customers for choosing us over others by offering loyalty cards, discounts if you bring your own coffee cup or tiffin container that we can refill. We also donate towards planting a tree via the Almond app every time customers spend over £10 with us.

SD: What has been the quickest win and the biggest challenge in establishing Cafe ODE?

TB: The biggest win has been using local suppliers and having a design of a café that allows us to efficiently serve 350 people a day.

The hardest bit was definitely getting the funding. None of the high street banks would lend us money, so in the end we had to scrape together enough through family and friends to purchase the stables (an early form of crowdfunding where funders received a % return and a loyalty card).

Triodos, an ethical bank based in Bristol shared our vision and fortunately lent us enough to help complete the build.

SD: How is community part of your operations?

TB: In order to make using compostable packaging commercially and environmentally more effective, we persuaded other cafés in the area to switch too and use the same supplier so that we effectively become a kind of co-operative hub so that one truck could deliver the packaging to all of us in one go.

We do a similar thing with our dairy supplier who delivers to a whole group of us on Monday. We also work closely with our local schools on environmental projects and recruit a number of young workers from 14 years of age.

SD: Do you think that training for chefs needs to be updated to reflect sustainable practices?

TB: We tell the guys here that it’s not just about the food on the plate, it’s bigger picture. We use the Sustainable Restaurant Association pillars of sustainability to explain why it’s important to consider sourcing, community and the environment.

This would be a great way of covering sustainability on the syllabus. But it’s really the educators who need to be educated first. Once that happens the lecturers will be able to develop the syllabus for sustainability themselves.

One of the sad things is there does seem to be a single-minded focus on Michelin starred restaurants or big hotels in the catering colleges. Students are pushed towards these options as if they are the only serious career choices.

That said, schools with younger students are starting to get involved and come to visit us at the café to learn how we are different from others.

Sadly it seems we have found that catering colleges won’t send us students on work placements because they see us as just a café. Yet we offer a good work-life balance and a great environment to learn both about quality food and sustainability.

SD: Sustainable food is often seen as expensive. How do you stay profitable and affordable?

TB: Fundamentally it’s all about waste. If you’re buying the best product, you expect to pay a bit more, but if you’re clever about not wasting anything you can often make up the extra by saving costs elsewhere.

When thinking about waste you have to look at water, packaging, staff labour, food and energy. There are savings to be made everywhere. It’s little things like we use the water from our tinned chickpeas to make mayonnaise and meringues. We also don’t peel our vegetables.

A while ago a chef would have said “no way, I’ve got to peel that carrot”. That was how chefs were taught. Now it’s up to chefs to promote zero-waste cooking methods to influence consumers cooking at home.

It’s different for every business too. The only way we can serve the 350 covers/day our concept involves, is to use compostable packaging rather than plates. We can easily fit our food boxes on a tray to serve as many as 10 meals in one go, which would be impossible with plates.

We may use more packaging, but we use very little water because we don’t wash up. This saves us the cost of the water and the cleaning chemicals, but also the labour both in making multiple trips to serve the food and in washing up afterwards. It also means that we aren’t tipping washing chemicals down the drain which ultimately end up in our oceans.

Chefs are not taught to be business savvy, but it makes a big difference to understanding where you can cut out waste, reduce costs and work more sustainably without negatively impacting on sales.

SD: You are very lucky in Devon to have so much wonderful produce on your doorstep. What are your thoughts on foraging?

TB: Ultimately foraging is an excellent way to get chefs to connect with nature. There is a danger, though, that people who are self-taught go foraging without really knowing what they’re doing.

There is a specific technique to remove a wild mushroom from the ground so as not to damage future growth. If you don’t know what you are doing, I suggest you leave it to the experts.

Devon has the largest area of organic land anywhere in the UK. We don’t specifically buy organic, but it’s always local and therefore is likely to also be organic. One of the reasons we came back to the UK was for the fantastic produce we have here.

I don’t really have the time to go foraging, but the few times I do it’s normally on the beach for things like sea lavender, sea rosemary or, when I’m collecting my fallow deer, I pick wild garlic from the lanes.