Domini Hogg finds out how a couple are combining their Indian and British heritage to create an alternative gin loved by chefs.

In between sessions delegates had the chance to wander about and talk to some suppliers, and I noticed an Indian couple who were presenting their new lassi-based gin, and explaining the reasoning behind the spices they were incorporating into it.

Lassi-based gin? It sounded improbable. I was able to press through the throng to ask them a few questions – and their answers were intriguing.

Setting up a business, as I know only too well, is a 24/7, full-on operation. When I finally caught up with Bruce Nagra he described their roller coaster ride to success with Crazy Gin… 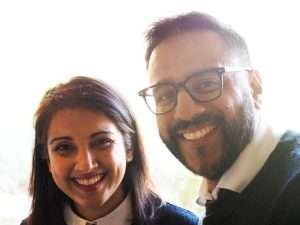 SD: How did you get the idea to make a gin out of lassi (am I pronouncing it right?) in the beginning, Bruce?

Well, it all started, just over three years ago with a bad curry. My wife Paramjit and I ordered an Indian take-away and the awfulness of the food resulted in us drinking a bit too much and starting to reminisce.

We were remembering how, although we’d both been born in the UK, our parents didn’t want us to forget our Indian heritage (both our families come from the Punjab). This was often done through spices, so there’d be spicy baked beans with the full English fry up.

Back in those days most of us were working in factories, families would share houses, and we couldn’t afford much meat or luxuries like fridges to keep it fresh.

So we would have curried spam….we loved spam curry growing up – the awful curry made us question if this was what other people thought Indian food was. Then we started reminiscing about how creative our parents were with Indian spices.

We both felt that over the time we’d been growing up in Britain we’d been on a kind of journey of culture combination. And we started fantasising – “wouldn’t it be cool if we could encapsulate that experience into a drink…. an alcoholic spirit in fact (since we both rather like those!)”. It was like dreaming of the lottery, we never really thought we would actually make it happen.

We needed something iconic….Tea? Cardamon? Neither were right

But we went on thinking about it, and in more and more detail. The base of our creation needed to be something iconic. We thought about tea…but really that’s Chinese, and it’s been a bit overdone. Then cardamom – but that’s a very powerful taste – we don’t “really use that in the Punjab.

What else? And it came to us – why not lassi? It’s centuries old, It’s basically just yoghurt and water, and it’s drunk throughout Asia and the middle east, but it’s definitely part of our heritage – my mother-in-law drinks it every Sunday!

We’re foodies, so we wanted to include the key spices which were part of our heritage – turmeric, coriander and black pepper.

“And it came to us – why not lassi? It’s centuries old… my mother-in-law drinks it every Sunday!”

“We wanted the key spices that were part of our heritage”

And we also like a drink! So we thought of whisky and rum, but neither of those go too well with yoghurt….but gin on the other hand was perfect – the juniper marries perfectly with out Indian spices.

Then we had to balance the flavours (by then we’d begun actively experimenting). We thought we’d add dried pomegranate seeds to give a bit of sweetness. And black cumin for smoky depth. It needed to have real flavour, an identity of its own…we didn’t want a drink which disappeared into the mixer!

But the result, thanks to the cloudy yellow effect of the turmeric, was less than alluring. How was that going to be solved?

“The cloudy yellow effect of the turmeric, was less than alluring. How was that going to be solved?”

I began to think of my culinary heroes, Heston Blumenthal and Sat Bains. They would be pushing boundaries, they’d be thinking of the customer experience, We’d have to think creatively.

So we decided to make our new drink look like gin. It should be clean and clear.

We decided to use rotary evaporators to achieve vacuum distillation. The change of pressure caused by the vacuum enables boiling, without curdling, at very low temperatures, and the gentle heat extracts more flavours. We decided to distill each ingredient separately and then mix.

“We decided to use rotary evaporators….”

Finally, we wanted to achieve a smooth drinking alcohol, something with a good mouthfeel. Many drinks producers use glycerol to get this result. But we said, “no, let’s use ghee”.

We decided to do a fat wash. We’d melt the ghee, and add the alcohol. Then we’d deep freeze the result. The ghee would separate out. One major problem is that, at the best of times ghee is insanely expensive – but worse than that, the sale of ghee is like the wild west.

When we started ghee was £6 per kilo – I found some a third of the price, but I discovered that was made with vegetable oil instead of butter (this is used a lot in Indian restaurants in Britain). In December 2017 the price had increased to £18.50! Now, three months later, it’s back down to £12.50. These sort of fluctuations don’t help our cash flow.

But it’s worth it. The ghee just takes the edge off – it makes it so smooth, you can drink it neat.

But our product still needed more drama and mystery

Then we decided we needed to give the drink a bit more drama, to help distinguish it and make it stand out. We’d used our life savings to develop the drink, our budget was non-existent, so if we were going to achieve a bit of theatre, we would have to be, again, a bit more resourceful.

We decided to make the bottle dark so that people couldn’t see what colour it was – it would make it more mysterious. And then we decided that people buy from people (vis Jack Daniels), so we put a face (my face, with my glasses) onto the label.

We also used the same sort of lined paper used on wine bottles to give the idea that this is a premium product – much has gone into the quality of the ingredients, and the method of production.

And then we decided the seal the bottle with white wax, partly to recall the yoghurt in the lassi, but also because (an idea from Professor Charles Spence) we wanted to deepen the whole experience around the drink – we wanted to give it texture.

SD: And the name?

BN: Ah, yes, the name. That came from my mother – ‘crazy’ was about the politest thing she called me! I had a good job – why would I want to take all these risks? But we thought it was positive – being crazy is about being courageous, being innovative – so we decided to put it in the name.

Then the problem was how to market it. We had a lucky break – a friend working for a company which had been helping us develop our product had an ‘in’ at Harvey Nichols. We had one bottle, and a home made label, but he took it along, and returned reporting “they loved it, the head buyer wants to place an order!”

So we launched at Harvey Nichols’ flagship Knightsbridge store, and since then we’ve been to many of their other stores (they love us in Leeds) and the sales there are doing well.

But we’re foodies at heart so we started to sell to chefs. Vineet Bhatia loved Crazy Gin. He told me; “My menu is all about childhood memories… we’re so aligned”. Sat Bains said; “Ah – that reminds me of the paratha that my mum used to make on a Sunday.”

These chefs have been inventive and helpful. I had a lot of waste products. I felt I had to do something with them – I could just see my mum looking at them and giving me a slap! We macerate our spices in a base spirit for 48 hours – it takes a lot of the flavours, but all the spices remain. Jon Villar used them for his cured lamb bacon, and Jon Villar has used them (with our alcoholic ghee) in his date chutney.

Recently my wife and I treated ourselves to dinner at The Fat Duck – I’ve got huge respect for Heston Blumenthal. I told them about my problem with the alcoholic ghee and two days later they rang up to say that Ed Cooke, the head chef there now, would like to experiment with it.

BN: Yes, you can now drink Crazy Gin at The Alchemist – it’s where I’ve always wanted it to get to.

SD: What does Crazy Gin pair with?

BN: If you are making cocktails you don’t have to work too hard – there is so much flavour in the gin that you can be quite classic – a gin and tonic, a dry martini.

But the idea is to be brave – try all kinds of things. At the conference organised at Oxford University a presentation was given by Dr Sebastian Ahnert explaining that in the West successful food pairings were often between ingredients with similar flavour compounds; but in Asia the reverse is true – clashing and opposing flavours result in explosions…in increased depth of flavour.

Try Crazy Gin with Coca Cola…. Or, surprisingly even to me, SodaFolk cream soda. It shouldn’t really work, but for the love of God, it does!

In terms of garnish, my favourite is a leaf or two of basil – smack it once before placing it in the glass.

*Last June Bruce and Paramjit gave up their jobs and moved from London to Wolverhampton where they have their own distillery. Very good luck to both of you – and Crazy Gin!