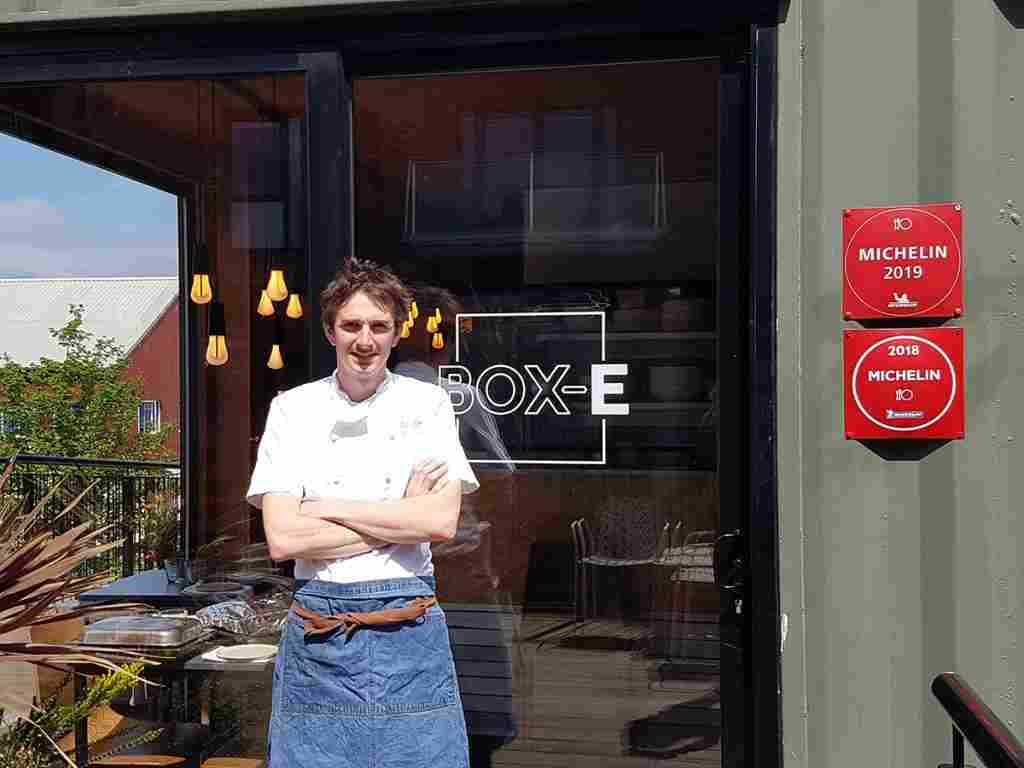 Bristol is truly a pioneering city when it comes to sustainability. The city has declared a “climate emergency” and committed to being carbon neutral by 2030, giving itself the most ambitious emissions targets of the major UK cities. It also has a strong ethos of supporting independent businesses.

DH: Box-E was a joint dream with your wife. How did it come about?

EL: We were looking to move out of London and had always joked about starting our own restaurant. We’d even started saving up for a stove, so it seemed like a good opportunity to see if we could find a place.

My wife, Tess, is from Bristol originally and we’d been looking here for about two and half years when we found this place. Until then everything had either been too large or the location wasn’t right.

Then one weekend we were down in Bristol for the weekend and spotted the announcement for Wapping Wharf in The Evening Post. It’s a development out of shipping containers in central Bristol designed to foster small, independent businesses, so the rent was manageable.

We called the director and were able to arrange a time to see him. Fortunately he really liked our concept and we managed to secure the last two containers. It was a real stroke of luck!

DH: How did it feel spending your life savings on a stove?

EL: It was a bit frightening, but we knew that it was a good investment, so it was exciting.

DH: You clearly make a good team, how do you split the work between you and do you have anyone else to help?

EL: Well, I do the cooking and the ordering. Tess does all the back of house work and also works three lunches a week front of house as well as on Saturday nights. We do have people to help us though.

There are eight of us in total but normally only four working at any one time. Typically that will be myself and my apprentice, Sam, cooking and two people serving.

DH: I imagine it can get quite busy in here…

EL: Yes, it can do. The evenings are very busy. Where you’re sitting at the kitchen table is booked up Saturday nights until September now, so you’d need to book a good three months in advance to get a place. We have a lovely set of regulars now and because they sit so close to the kitchen, I actually get to know them well.

View from the kitchen table of Elliott cooking up a storm

DH: What did you learn from working at Michelin star restaurants?

EL: Consistency – it’s so important! The quality of the produce you buy makes a big difference too and also making the most of the seasons so that you get the produce when it’s at its peak. Not all Michelin star restaurants design their menus with seasonality in mind, but I think they’re crazy not to.

“I start by looking at what’s in season and then try to make that shine.”

DH: How do you design your menus?

EL: I start by looking at what’s in season and then try to make that shine. Space wise we are quite restricted here. We don’t have any external storage so that means we have to really focus on the flavour of the fresh produce we buy. Everything is quite pared back.

Innovative use of space in Box-E restaurant

DH: How do the seasons differ? Are there some that are more difficult than others?

EL: Every season has its own character. In the winter you have the root veg and the game meats for example. March and April is perhaps more challenging, but you can still use the very end of the root veg and dip into Europe if you need to as they’ll have some of the spring veg coming out by then.

I find that time of year very exciting because you’re waiting for the first asparagus and rhubarb to appear.

DH: Have you seen any economic benefits of working with local suppliers and having a seasonal menu?

EL: It definitely makes sense to source seasonally because price wise everything is much more sensible. Last year I got the very first bunch of asparagus that was out and it cost me a fortune.

DH: How did you go about finding your suppliers locally?

EL: The fishmonger I had already been using while in London, and then the butcher popped in with some samples while I was painting in here. Everyone else kind of just fell into place from speaking to people locally. There’s a good chef’s network here.

DH: Do you keep an eye out for new local suppliers emerging?

EL: We have a nice network of suppliers we use already, but if we ever hear of anyone, it’s always interesting. Sometimes our guests at the kitchen table will mention someone. Last week, for example, one of them mentioned a local supplier of goat butter and goat cream.

DH: Where would you like to see the biggest change in the industry happen from a sustainability perspective?

EL: I’d like to see more smaller producers in the supply chain and more direct relationships, but the logistics of that are quite tricky. Perhaps there’s a way of building more direct links through a network of who does what, how, when and how much they can produce.

“I’d like to see more smaller producers in the supply chain and more direct relationships, but the logistics of that are quite tricky.”

I’d also like to feel confident that what I was ordering was truly sustainable. It can be quite complex to know what is and isn’t sustainable sometimes and there isn’t always a sustainable option available.