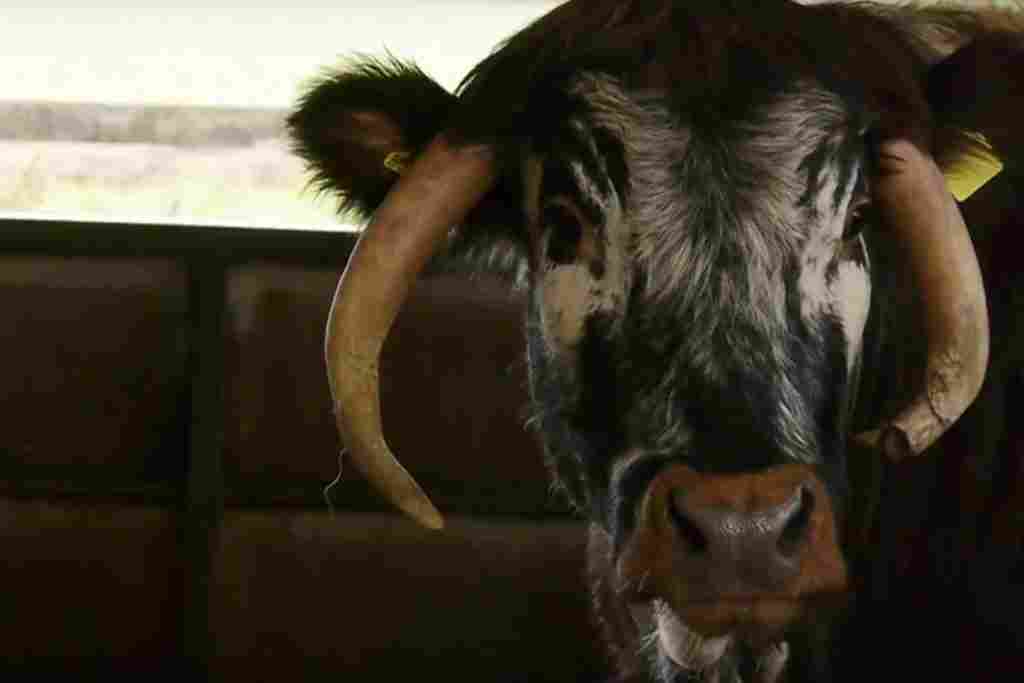 Domini Hogg catches up with one of the top rare-breed meat suppliers in the UK, Richard Vaughan, owner of Huntsham Farm. He describes the ins and outs of farming rare-breed animals to achieve Heston Blumenthal’s idea of perfection. Domini is founder of Tried and Supplied.

DH: You specialise in rare breed beef, pork and lamb. How rare exactly are they?

RV: Let’s go back a bit and answer the question why are breeds rare in the first place. Food production has been driven extensively by how we can make it cheaper. It’s completely unlike the booze industry in that respect where quality counts for a great deal and specific terroirs or chateaux can really drive up the price.

What this means is that cows, sheep and pigs have all been bred to maximise the yield of marketable meat in the most efficient way, making breeds like Longhorn cattle, Ryeland sheep and Middle White pigs that I farm incredibly rare.

“These pigs are considerably more rare than giant pandas.”

There are only 200 breeding Middle White sows in the UK and a relatively small population in Japan, making these pigs considerably more rare than giant pandas, which have a current population of over 1800.

In the 1930’s the Middle White reigned supreme and was called The London Porker and they exported them to Japan who were so impressed they put a monument up in honour of the breed, and even now, apparently the Emperor of Japan will only eat Middle White pork.

The reason they are now very rare is because they average about 18 piglets per sow per annum, compared to an average of about 36 piglets a year for top Danish sows.

My Ryeland sheep average one and a quarter lambs per ewe each year, whereas a modern flock would be nearer two. They’re just more prolific.

Longhorns were a rare breed, but partly because Heston Blumenthal singled my Longhorn beef out as his idea of perfection, more farmers became interested in farming them and their population has grown so that they are now a minority breed rather than a rare breed.

DH: Will you continue to farm Longhorns now that they are no longer a rare breed?

RV: Absolutely. I don’t specialise in farming rare breed animals. I specialise in breeds of livestock that give superior eating qualities and just because Longhorns have grown in popularity, it doesn’t mean they are any less good.

DH: And how do you counter the drive for cheap meat?

RV: Well, typically the consumer pays three and a half times what a farmer receives. It makes sense for me to farm animals of superior quality that take longer to grow because I sell direct to my customers – either private customers or chefs.

I can make a profit on my meat that way and remain competitive for customers. What we need is a mechanism to help less efficient animal products reach customers more directly.

“What we need is a mechanism to help less efficient animal products reach customers more directly.”

DH: What makes your animals such good quality?

RV: The fat. People don’t like to eat fat these days, because the medical profession has created such a stigma around it, but it’s the fat that gives meat its flavour. Even if you choose not to eat it, it’s important that the fat is there, just like the sediment in good wine.

Unfortunately the current grading system for beef and lamb doesn’t recognise the real quality of flavour. These meats are graded on a visual scale according to the shape of the animal and the fat content, where high fat content is considered negative.

In actual fact from a flavour perspective, a really good quality beef steak would be fine grained and well-marbled. Well-marbled refers to the inter-muscular fat that makes a meat truly unctuous.

“People don’t like to eat fat these days, because the medical profession has created such a stigma around it, but it’s the fat that gives meat its flavour. Even if you choose not to eat it, it’s important that the fat is there, just like the sediment in good wine.”

Animals have frequently been bred to have large arses, because that’s where the high-value cuts come from. They’re also bred to be lean, because that is what current tastes look for, but very lean meat just doesn’t taste right.

It also takes two and a half times more energy to produce a kilo of fat than a kilo of lean and you can feed the animals more intensively so that they grow faster and pass through the farm more quickly. All this has a big impact on profitability, but we choose to grow our animals slowly because they taste better.

DH: Heston Blumenthal chose your Longhorn beef as his idea of perfection. How did this happen?

RV: It was about 15 years ago when the BBC got in touch explaining that Heston Blumenthal would be doing a blind tasting of eight different kinds of beef on their programme and could I supply one of them.

Unfortunately the animal I had available for the time they wanted, wasn’t my best example. If they’d waited a few weeks I could have sent them a much better sample, but they couldn’t wait. I sent what I had off to the show and went on holiday.

The programme happened and I didn’t hear anything. When I came back from holiday I called up and got Heston’s Head of Food Laboratory on the phone and asked the result of the trial.

He had to go and look it up before he could tell me my beef had been chosen as number one! Imagine what he might have thought if I had been able to supply my very best.

DH: What was the impact of Heston’s choice on television on your business?

It obviously helps. It was a half hour programme and generated a wadge of new customers for us, but it’s rare you are inundated with customers as a result of this kind of publicity.

You might worry about whether you can manage the order volume following the show, but it’s always manageable. We have never supplied Heston’s Fat Duck though, we used to supply his Hinds Head hotel, but then the chef changed.

Heston did ask us once if we could supply 15 single deckles for The Fat Duck, but this would have been impossible for us.

“With catering butchers you don’t know the full provenance and welfare of the animal in the same way as you do when buying from a farm like ours where we control the whole cycle.”

A deckle is a single muscle from the centre of the fore-rib joint, which involves trashing what would otherwise be an expensive fore-rib cut. It wouldn’t have made sense for us and we wouldn’t have been able to produce that volume either.

I think in the end he went for a catering butcher. They work completely differently as they buy whatever they need and would be able to put the rest of the fore-rib through the mincer. But with catering butchers you don’t know the full provenance and welfare of the animal in the same way as you do when buying from a farm like ours where we control the whole cycle.

DH: Beyond Heston Blumenthal, you supply many of the top chefs in the country. What has been your experience of working with chefs so far?

RV: They are very easy to work with provided that everything is perfect. They don’t tolerate mistakes. We produce what we produce and the chefs say it’s perfect.

DH: You also supply less popular animal parts like pig’s trotters and beef bone marrow. How often do you get requests for these parts? Do you think more chefs will start to request them?

RV: It depends a lot on the chef. Some chefs like Fergus Henderson at St. Johns ask us to send them any bits we can. What we tend to do with chefs like this is bung the unwanted parts into packages as freebies in their box.

It’s a lucky dip. Sometimes they get a bag of ears and other times they’ll get a bag of hearts. We like to support our chefs economically where we can.

As to whether more chefs will start to request them, I’m not sure. The kinds of chefs that come out of St. Johns yes absolutely. There is a growing interest in nose to tail eating. It requires chefs to be more inventive and diners to come mentally prepared for it.

Fergus Henderson says that a half Middle White head on a plate is the perfect meal for two at St John’s, but most people would run a mile from that kind of dish.

“There is a growing interest in nose to tail eating. It requires chefs to be more inventive and diners to come mentally prepared for it.”

One time I had Michelin-star chef Bruce Poole visit. He spotted some kidneys in a carcass and exclaimed “let’s have those for breakfast!” He proceeded to very lightly fry the kidneys in butter and serve them with scrambled egg.

Unlike the tough overcooked kidneys you often get in steak and kidney pie, these kidneys were beautifully tender and excellent with scrambled eggs. That’s a chef that really knows what he’s doing!

Some chefs are inventive like that, but the catering colleges don’t produce them, which is why I doubt we’ll see much of an increase in popularity for many of these less requested parts.