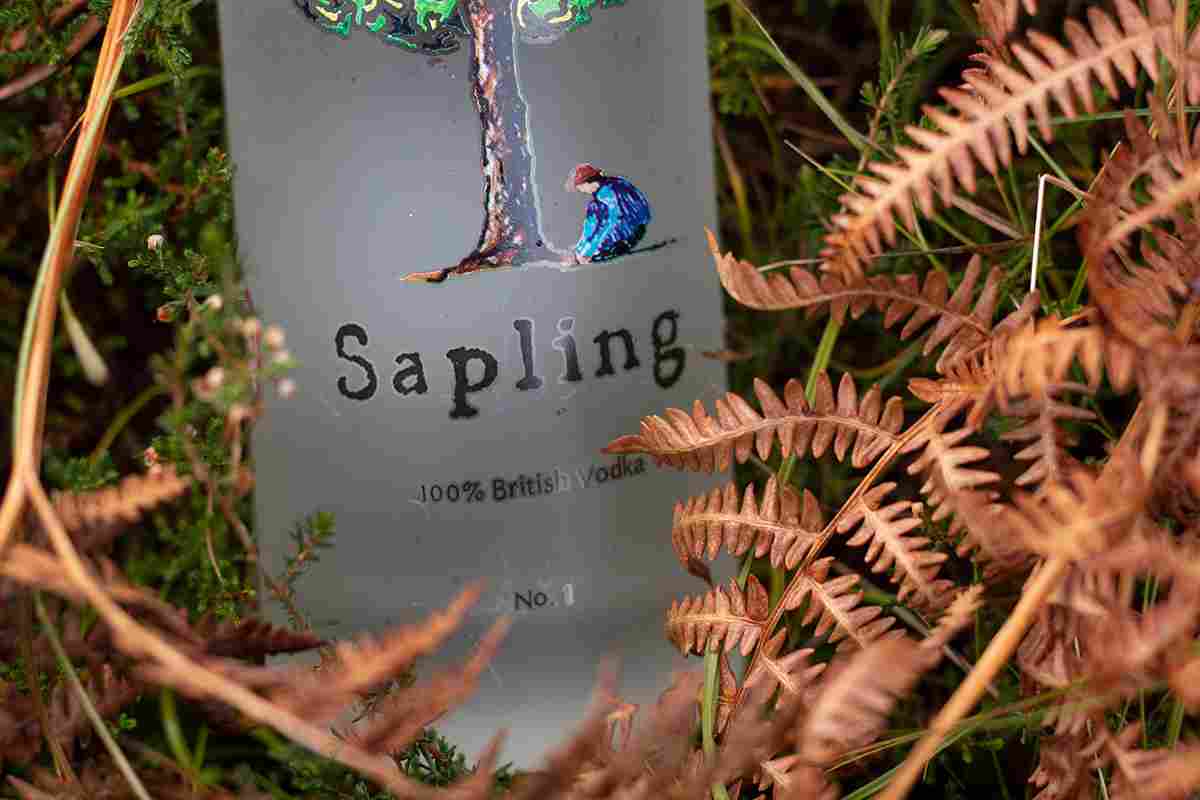 The gin market worldwide is well and truly saturated. So, no surprise then, to find the talk at this year’s Restaurant Show in London was all about vodka. Flavoured rum and mezcal got a mention, but the focus was on vodka.

Of particular interest to British restaurateurs is Sapling vodka. Fabulously packaged, it also has a fabulous taste, coming top in this year’s GQ line up of The Best Vodkas In The World.

It’s made in west London. And as they make… they plant. A recent study found that an average bottle of vodka uses 2.8kg of carbon before it reaches its customer. So Sapling plant trees, each one of which can absorb up to 1.5 tonnes of carbon in its lifetime. Every bottle is significantly carbon positive, resulting in clear-conscience drinking.

I took the opportunity to ask Ed Faulkner, one of the two founders of Sapling, some questions about this very special vodka.

DH: Where did you get the idea of setting up a vodka distillery in the first place?

EF: There are two of us. Myself and Ivo Devereux. We both grew up in London and and have know each other since we were kids. After school Ivo worked in music management and set up club nights and a sustainable music festival in Scotland. In doing so he realised that huge lack of sustainable products in the spirit market.

I used to work for a craft food and drink distributor and was introduced to a number of the craft gin distillers in south London. Through meeting them Ivo and I starting distilling for fun while we were working and created a vodka recipe we were very happy with.

We both thought a super sustainable spirit would do very well in the UK so decided to launch in November last year! Vodka is a much bigger market than gin in the UK so we thought it would give us a larger opportunity to plant trees. Vodka was always the spirit we used to drink, and gin was so saturated!

DH: What market are you aiming at and why?

EF: We are aiming at the new generation of drinkers coming through as well as anyone and everyone who has a passion for drinking British products, and enhancing the natural world.

DH: How did you get the funding you needed?

EF: We got our start-up funding through money we had saved. As we don’t have our own distillery or premises we were able to launch with a minimal amount of money. We have now raised a bit of money to push on and launch some variations of our product.

DH: What were the main challenges?

EF: The main challenges are competing with Diageo and Pernod Ricard with listing fees and budgets!

DH: Tell us about your wheat

EF: Our wheat all come from the UK. It is non-GMO so has a higher starch content which gives the vodka an amazing natural sweetness which lends itself perfectly to a number of popular cocktails.

DH: How do you filter (or do you use a pot still) and how many times… ? what effect on flavour does this have?

EF: It is distilled four times and we use charcoal filtered de-ionised water. This removes any impurities and gives it its smooth texture and pure taste.

DH: What are your routes to market?? Are you primarily wholesale or retail? If wholesale what sort of barmen are you aiming at?

EF: We mainly sell to wholesalers who distribute into bars, clubs and hotels. We work with Amathus drinks, and Speciality drinks, among others. We also sell through a number of online retailers.

DH: The bottle and the labeling is fabulous – I especially like the illustration of the little man. how did that develop?

EF: We developed the brand with our old flat-mate. We wanted to create a bottle that told our brand story for us but also had a warm feel to it.

DH: Tell us a bit more about the trees you plant.

EF: All of our planting projects are geared towards benefiting local communities. So far we have planted most of the trees with our own hands and will be looking to carry this on as long as we can.

We have planting projects in London, Suffolk, Bristol, and Morocco. We plant fruit trees as these are not only good for the environment but they also can be foraged and harvested to the benefit of locals. We try and plant as local as we can to where people are drinking.

DH: Do you have a favourite way of drinking Sapling?

EF: It’s great as a London Mule and it also good quite simple, just with a slimline tonic and a sprig of rosemary!