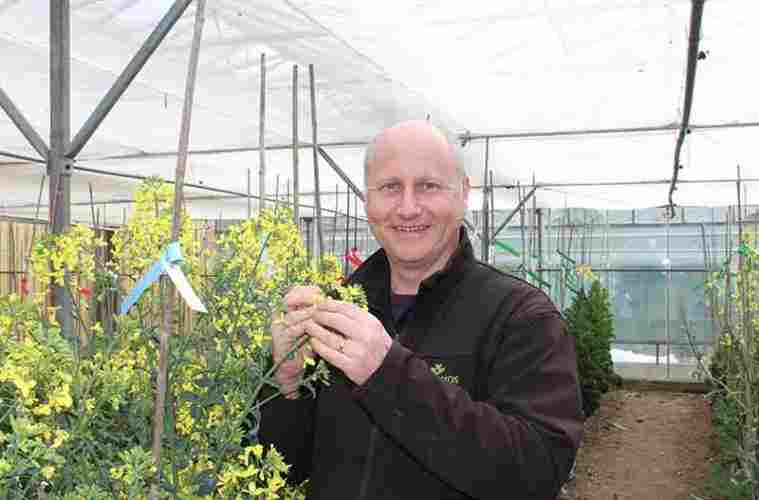 The vegetable was renamed because one of its parents – the Brussels Sprout – suffers from a particularly bad press, and is famously and globally loathed by children for its bitter taste. Its other parent however – kale – positively basks in popularity, thanks to enthusiastic exponents such as Gwyneth Paltrow.

I’ve put my questions to Dr Jamie Claxton who is Director of Plant Breeding at Tozer Seeds, and who is also the breeder of kalettes. His fascinating job involves developing all kinds of new vegetables and salad leaves, and he collaborates closely with major growers and supermarkets in the UK and abroad.

DH: Who was involved in the development of kalettes?

JC: Developing kalettes was a real team effort within Tozer Seeds. It all started with the ‘brainstorm’ idea of trying to cross pollinate between different members of the vegetable brassica group, many of which cross together quite naturally and easily. The idea was to create something new that appealed to the modern consumer with a great flavour, combined with quick and convenient cooking.

The idea was to create something new that appealed to the modern consumer with a great flavour, combined with quick and convenient cooking.

Developing these parent lines required many years of painstaking specialised self-pollination and selection work. Once we had developed a lot of interesting hybrids, our trials and product development teams showcased many trial varieties of kalettes as widely as possible, including overseas, to decide which of the hybrids were the best.

Our sales and marketing teams then worked very hard to promote and market the product; a real challenge when we are dealing with an entirely new vegetable; we kept being told ‘It looks amazing, but the customers wouldn’t know what to do with it!’

We kept being told ‘It looks amazing, but the customers wouldn’t know what to do with it!’

We also sent samples of our product to professional chefs for their input. Eventually, we had a firm commitment from Marks & Spencer to stock the product, so our skilled seed production team were tasked with ‘upscaling’ production to produce commercial volumes of seed; this in itself can be a very tricky process, beset with many potential problems.

DH: What are the challenges to growing a new vegetable from a scientific point of view?

JC: Anything that is completely new will take commercial growers a while to understand how it performs, including what rate of fertiliser to use and whether it has any particular pest and disease issues.

Happily, kalettes seem to grow very much like Brussels sprouts and are particularly winter hardy without many growing issues.

We have managed to make a very tender oriental-type vegetable which has got rid of the tough stalk that is sometimes found in kale and improved the flavour by removing the bitterness sometimes found in both kale and sprouts. The open rosette habit allows for very quick cooking.

We select all our varieties on flavour profile, which often involves munching lots of raw veg in the field!  We only chose varieties that combined the flavour profile of the best flavoured kale and Brussels sprout parent lines that we had developed.

We select all our varieties on flavour profile, which often involves munching lots of raw veg in the field!

DH: What other vegetables were considered before settling on Brussels sprouts?

JC: Most of the vegetable brassicas cross pollinate easily. We tried lots of crosses, including crossing things like cauliflower and broccoli with kale and sprouts!

Unfortunately, a lot of these crosses produced very strange-looking plants that didn’t really work in terms of yield and quality as the plants were very low growing and low yielding, unlike the tall high-yielding growth habit of kalettes.

A lot of these crosses produced very strange-looking plants that didn’t really work in terms of yield and quality.

DH: What are the challenges to growing a new vegetable from a marketing point of view?

JC: Initially we did not carry out any market research, it was a breeding project based on the thoughts and feelings of those involved.

In 2007 we began to work closely with M&S who gave us confidence that the product would have a market.  M&S had a three year exclusive and shared sales data with us for those three years.

We only began to look at customer data (Kantar) around four years ago. We used market research to decide if to change the name of the product from Flower sprout to Kalette.

Marketing is now carried out by John Corbett of Little Big Voice.  John has a great deal of experience with both growers and retailers.

DH: What are the financial challenges of growing a new vegetable?

JC: There is a particular challenge with kalettes as we only provide the seed, not the finished product.  This means that the key relationship between grower and retailer is separated from us.

We have had to develop a marketing fund by using a portion of the money we receive from seed sales and keep in close contact with retailers and growers.

DH: You are selling kalettes internationally – where have they proved to be most popular?

JC: They are currently very popular in Australia but the largest market so far is the UK.  I think the British are keen on vegetables but also very keen to try new foods.

DH: Although first developed some 20 years ago it’s only recently that kalettes have really taken off – what was the turning point?

JC: In 2013 we entered the Innovation of the Year award at Fruit Logistica and although we didn’t win we received fantastic publicity, this sparked international interest.  Other key events were a feature on the One Show and lately on Countryfile.

DH: Has anything surprised you about the development of kalettes?

JC: That you have to keep working hard to maintain success.

DH: What’s next? What is the market seeking now?

JC: We are always up for a new challenge at tozer seeds! We are now developing new and exciting convenient quick-cook kale varieties which are packed with colour, great texture and a mild, sweet flavour.

Kale is a very traditional vegetable – we all know it is very healthy so by re-inventing traditional veg we can bring something new to the dinner-plate.

DH: Are there any small, specialist UK suppliers of kalettes which you recommend?

JC: Not really, we are closer to the growers than the people selling the products. Staples Brothers in Lincolnshire is the largest grower of kalettes and have always been very supportive.

JC: Our early variety, Autumn Star, is my current favourite simply because it is the first variety to hit the shops as it crops the earliest. I love eating kalettes simply stir-fried quickly in sesame oil with a dash of soy sauce.

DH: Is there anything else we should know about kalettes, or about what tozer is doing?

JC: We are still busily developing more new varieties of kalettes, to extend the growing season and provide new types with different vibrant colours, textures and flavours – watch this space!