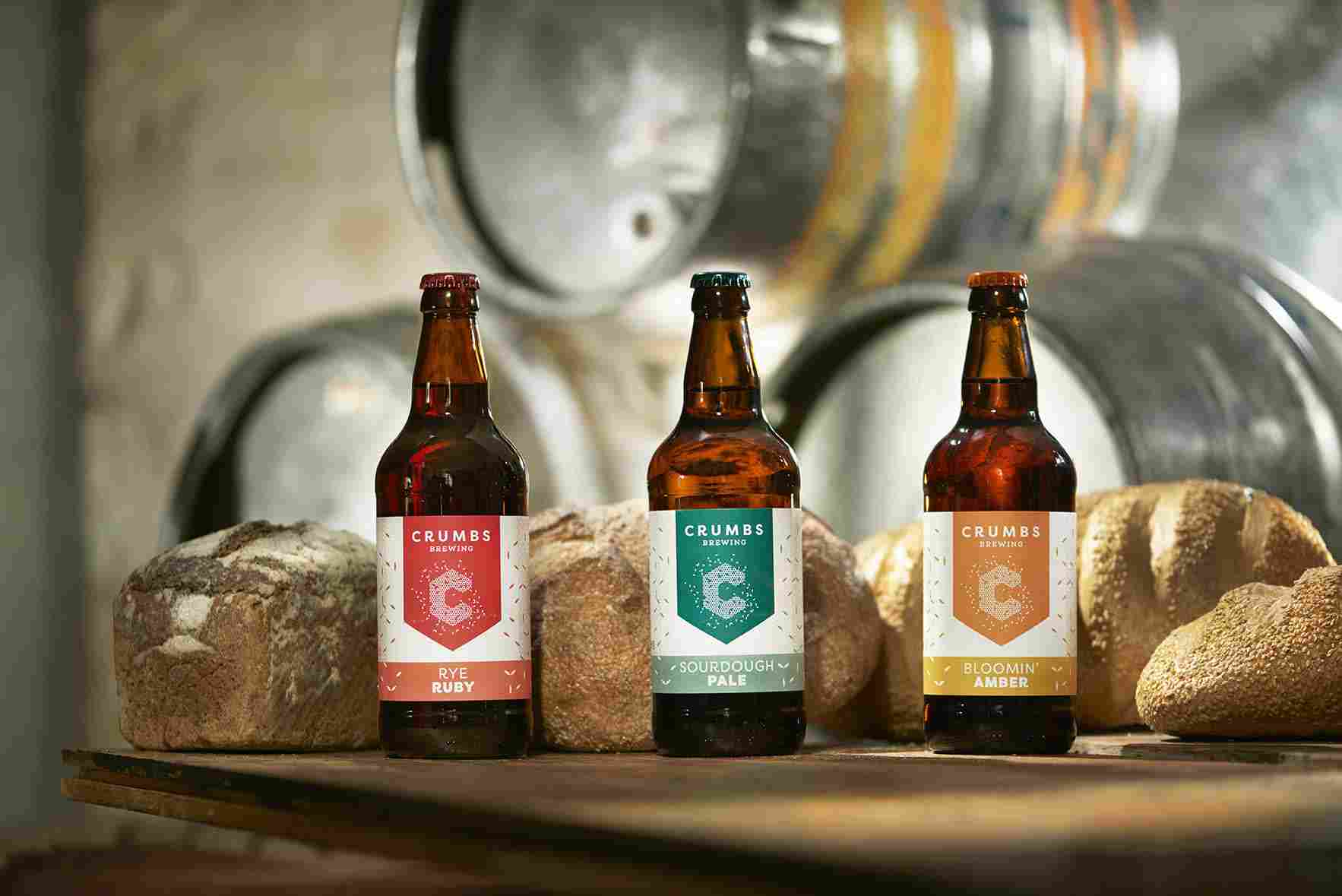 What happens to leftover bread at the end of the day? If you’re Morgan Arnell, you’re going to turn it into beer. I sat down with Morgan to talk about Crumbs Brewing, food waste, and how exactly bread can be used to enhance the flavour of craft beer.

DH: Crumbs Brewing is known for using leftover bread to create your beer. Could you explain how you got this idea, and how exactly this works?

MA: We’d heard about a few brewers starting to rediscover some of the ancient approaches to brewing with bread and also came across the startling fact that 44% of all bread made in the UK never gets eaten.
It got us thinking about our local baker and how frustrating leftovers must be for them. Their bread is all handmade artisan stuff so it seemed even more of a travesty that so much gets wasted.
Having spent a bit of time working in the booze industry I started making enquiries as to how we could actually go about brewing with bread ourselves.
After a lot of research, and a lot of help from some amazing experts, we cracked a way we could not only brew with bread but also a method that got the most out of the bread in the brew (both flavour and its contribution towards fermentability).
From the start we wanted to ensure each beer was only made with one style of loaf so the style of the loaf specifically contributes to the style of the beer.
To cut a long story short, ‘crumbing’ the bread (hence our name) and using it to replace about 25% of the malts that usually go into the initial mashing phase of the brew was the optimum approach.
Beyond that, the brewing process is pretty similar to regular beer – so the other challenge for us was to determine what malts, hops and yeast we needed to use alongside the bread to ensure they work with and enhance the flavours coming from the bread.

DH: On your blog you explain that bread has been linked with beer since early Sumerian cultures. Is this link something that has largely been forgotten?

MA: In the last few hundred years there have been a lot of laws controlling approaches to brewing, the Reinheitsgebot German purity law being a good example.
They limited the ingredients in order to control quality. I guess that’s the key reason for some of the ancient approaches dying out.
It’s only been in recent times, alongside the explosion in ‘craft’ brewing, that breweries have started to embrace innovation and also rediscover ancient and more unusual methods. I think it was the Brussels Beer Project who first rediscovered the links between bread and beer.
DH: You’ve partnered with Chalk Hills Bakery to use their leftover bread. How did you decide on Chalk Hills?
MA: As our local baker they were an obvious first choice. On top of that they make great bread – as already mentioned we wanted the bread itself to add something so it was important for that to be of as high a quality as the other ingredients we use.
Chris and Rosie who run the bakery used to work as publicans so they were intrigued and quite excited about the idea when we approached them. Because they only sell bread baked that morning in their shop, leftovers are unavoidable.
We collect any unsold bread from the bakery shop every evening and also collect back unsold loaves from their customers (farm shops, restaurants etc). We crumb it and freeze it until we need it for brewing.

DH: With your newest beer, the rye coffee porter, you’re also tackling the wastage of coffee grounds. How did you come up with this idea? Are there any other waste products that you think you could use in the future?
MA: We were always keen for Crumbs to not just be about bread. We’re open to repurposing any artisan products that may otherwise go to waste.
The coffee machine in the bakery cafe churns out a huge amount of coffee grounds every day. Chris and Rosie have tried giving them away to customers to use as fertiliser but it never really took off, so we thought it would be a great thing to incorporate into a brew.
The coffee in the shop also comes from a small artisan producer called Union Coffee so it fits well with our desire to reduce waste but not at the expense of quality.
We’ve got a long list of ideas for future brews – from different types of bread (fancy a Naan Bread Pilsner with your curry) to fruits and even cake that can add interesting flavours.

Their rye coffee porter is made from leftover coffee grounds

DH: You used crowdfunding to raise money in order to create your rye and sourdough beers. What was that experience like?
MA: Our crowdfunding experience was great but it’s not for the faint hearted. It takes a huge investment of time and energy to make successful.
I think sometime people see it as an ‘easy’ route to funding. It definitely isn’t.  They are a great way to engage a loyal following behind your brand. It will certainly be something we revisit in the future.
DH: What advice do you have for amateur brewers looking to produce their beers professionally?
MA: Surround yourself with experts. From a brewing perspective this was surprisingly easy. In our experience brewers love to share their knowledge.
We were also lucky to find a team that were up for the challenge of doing things differently (several brewers we approached in the early days weren’t quite so open to the idea of throwing a lot of bread into their kit). It’s actually been the sales and commercial side that has been far more challenging.
A growing craft beer market is a great thing, but it’s also highly competitive. We should have given more thought to our routes to market from day one. It’s very easy to spend most of the time getting excited about your product and not so much how you will sell it!
DH: On your blog you also talk about potentially trying to create a prosecco from leftover artisan ingredients – do you think that this could be possible? Other than prosecco, what drinks would you consider creating?
MA: Our Crumb Counter, Elaine, isn’t a big beer fan so she’s definitely keen for us to branch out at some point.  Prosecco might be a bit of a stretch but we are already working on developing a spirit distilled from bread. We’re not yet sure if its gong to be more gin or whisky-like. Watch this space….
DH: Do you have anything new coming up?
MA: Beyond more beers we also launched the Reigate Beer Walk in collaboration with our friends at Pilgrim Brewery in Reigate.
Reigate has been intrinsically linked to brewing for hundred of years and used to be home to the biggest brewer in the south east. A ticket for the walk gets you a guided walk through the important brewing site of the town as well as plenty of samples of Crumbs and Pilgrim beers.
Related Articles
Share Article