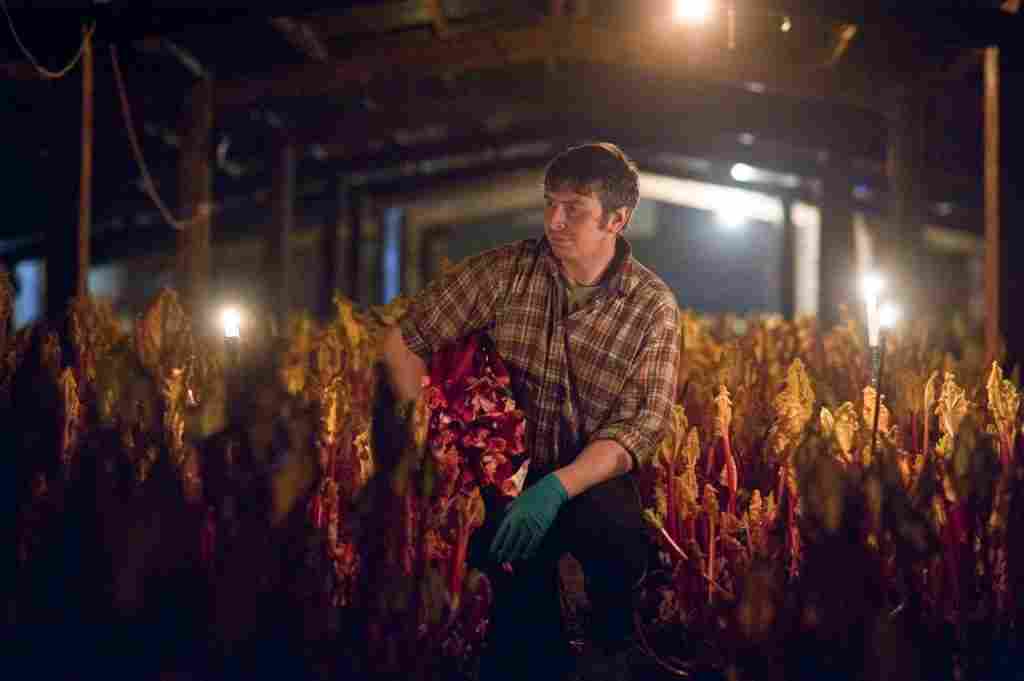 There used to be 200 forced rhubarb producers in Yorkshire. Now there are only 10. Grown in the dark and harvested by candlelight, forced rhubarb is sweeter and less stringy than standard rhubarb and is a beloved ingredient of chefs across the UK, but will it be able to survive many more generations?

I spoke to Robert Tomlinson, one of the last remaining forced rhubarb suppliers in Yorkshire, otherwise known as Rhubarb Rob.

DH: When did you start growing forced rhubarb?

RT: Forced rhubarb has been a tradition in my family since the 1800s. I’m now the 4th generation to take it on and I started working for my father when I finished school at 16. I think there’s only one other producer that has been going as long as we have. Most of the big growers started in the 60s and 70s.

DH: What is different about the growing process and taste compared to normal rhubarb?

We heat the sheds so that the rhubarb roots think it’s spring and start to look for light. Years ago this used to be done with a coal fire, but now we use a standard heater. It’s important to keep the light away because otherwise the rhubarb starts to produce chlorophyll which takes the sugar out of the roots and into the leaves. This is why we harvest by candle light.

DH: Why has there been a decline in forced rhubarb producers? Has this been a gradual or a sudden decline?

RT: It really went downhill in the 70s and 80s when supermarkets began importing fruit during the winter. Before that forced rhubarb was the only real option during the winter months. It’s a vegetable not a fruit, but it is often used as a fruit.

Before the decline in the 70s there was actually quite a lot of experimentation going on to produce rhubarb with a better colour and flavour. We started with 30 of the new rhubarb roots and we have grown this to 50,000, of which we’ll keep half for stock for next year. It takes about 20 years to build up a good stock.

Robert Tomlinson harvesting his forced rhubarb by candlelight in the sheds

DH: How has the weather last year affected this year’s harvest?

RT: It was so hot that the roots didn’t grow well, so our harvest was down by one third. That means a loss of £50-60,0000, which is difficult to recover from. The price has gone up, but not enough to compensate. That represents two year’s worth of investment and if the weather isn’t better this year, it will start to accumulate.

DH: Is climate change having a longer-term effect on the harvest?

RT: It’s pushing the harvest back. Years ago we used to fetch the roots in from outside in October and pick them in December, but now it’s too mild for the roots to go dormant until early December so we aren’t picking the rhubarb until after Christmas.

DH: Do you think the tradition of forced rhubarb is at risk of disappearing?

RT: It wouldn’t surprise me if within a generation we were down from ten farms to five. A lot of farmers do it more as a hobby now. I know one big grower is thinking of giving up because he can’t find the staff.

The farms used to be passed down from father to son, but nowadays the next generation is often not interested. So far my two seem to be keen. I have a son and a daughter, but they’re only ten and eleven.

Part of the problem is that no-one is going to develop machinery for ten farms so the work is often quite manual and much harder work than on other farms. Attracting staff can be difficult.

I do worry that if no-one can get hold of it, they’ll just forget about it. Chefs like Clare Smyth posting on Instagram play a big role in keeping it alive. That way even if consumers can’t buy it themselves, they know about it and can look out for it.

Chefs like Clare Smyth posting on Instagram play a big role in keeping it alive. That way even if consumers can’t buy it themselves, they know about it and can look out for it.

It would be difficult to scale up supply if demand were to increase though. Many of the rhubarb sheds have fallen into disuse now and it takes a lot of investment to get them back up and running again.

We used to operate twelve rhubarb sheds, but now it’s only four and it took us 15 years to build back up to four from only one in the 80s/90s. If the weather continues to be difficult, this would be especially challenging.