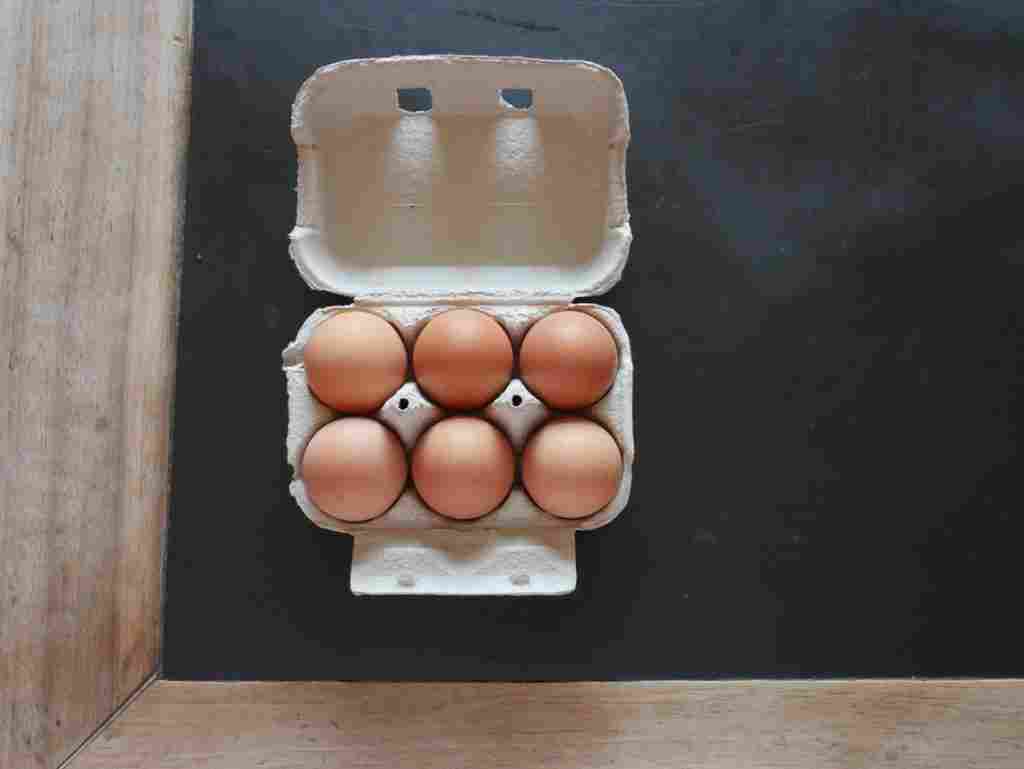 The demand for free-range eggs is increasing, but the lives of free-range egg farmers are not getting easier. I spoke to Ben Jackson of Fluffetts Farm in Hampshire about the challenges of modern egg farming, the quirks of chickens and the unique diet he has developed for his hens.

DH: You used to run your own kite surfing shop in London. How did you get in egg farming?

BJ: Yes, it does seem like quite a shift from birdless flight to flightless bird, but ultimately they are both consumer-focused businesses and I grew up on a farm.

It wasn’t intentional, though. My step-father’s farm had been struggling for a while and their latest strategy was egg farming. I got involved trying to help them out as they suddenly found themselves up against the technicalities of dealing with a big supply chain.

In early 2008 Fluffetts had just secured its first proper contract to supply free-range eggs to Hampshire schools through HC3S, a forward-thinking catering company that went on to win the Compassion in World Farming Good Egg Award as a result of locally sourcing our free-range eggs. To cut a long story short, I ended up staying and taking over the farm.

One of the things I like about it compared to the kite surfing shop is that we are creating our own produce rather than reselling someone else’s product. 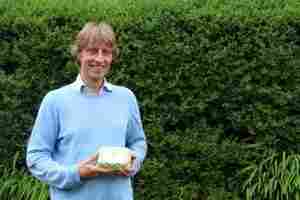 DH: A number of free-range egg companies have gone into administration recently. Why do you think some free range egg farms are struggling at the moment?

BJ: Twenty years ago the price a free range egg farmer could expect to receive from the packer was £1/dozen. Today it’s only 79p, yet the price for feed has gone up two and half times in the same period.

On top of that the free-range industry is experiencing a period of surplus, partly due to supermarkets anticipating future demand and insisting on a minimum flock size of 60,000 birds to win a contract. This has the knock on effect of further reducing the price for eggs across the whole industry.

You can still get a good price for large eggs, but 40-50% of eggs are mediums and with the consumer preference for large eggs the mediums have been bearing the brunt of the surplus in “two-for-one” deals or ending up in the processing industry, which used to take the eggs with slight defects that couldn’t be sold in the supermarket.

It’s a classic victim of success situation. The British Free Range Egg Producers Association has been warning about the surplus for about three years now and campaigning to ensure new entrants understand the market conditions and encourage more consumers to eat a wider range of egg sizes.

DH: Beyond eating more medium eggs, what do you think can be done to help?

BJ: It would help egg farmers if they could garner more interest in produce they typically can’t sell. Pullet eggs, for example, are a smaller size of egg that the younger hens lay, but they are difficult to sell. They are actually better quality eggs, but because they aren’t as large as the eggs the older hens lay, people don’t want them.

Pullet eggs tend to have a slightly sweeter taste and their white is more jelly-like and because all hens produce the same amount of shell throughout their lives, the shells on the smaller eggs are thicker and therefore they keep fresh for longer.

It would also be helpful to receive a better price for the end-of-life hen. In the ’50s-’60s egg producers would have a relationship with the local butcher who would boil up the end-of-life hens and sell them as boilers, but since then EU regulation has come in to ensure that all animals are slaughtered in registered abattoirs.

After 13-14 months of laying, a hen is less meaty, but is some of the most flavoursome you’ll get. Sue Quinn recently wrote an article about how these spent hens are currently wasted in The Telegraph.

DH: You work with a lot of chefs. How important are they to your business?

BJ: Supplying chefs forms a very important part of my business. Not only do they provide regular business, but I am also able to build close relationships with them and offer them good deals on produce like pullet eggs.

They tend to have greater knowledge of the food they are buying than consumers and are more creative with how they use it, which means they are less binary in what they buy and able to be flexible in using produce that wouldn’t sell elsewhere.

DH: Have you thought about keeping rare-breed hens?

BJ: No, they’re not so productive and often trickier to manage. They tend to produce fewer eggs and less consistent ones so you get more ‘seconds’, which are the eggs with slight defects that can’t be classed as Class A eggs.

Seconds are currently valued at a 20th the price of a Class A egg and rare-breed hens often produce four times more seconds than your typical hen, which at that kind of price and given the current climate of oversupply tends to lead to four times more wastage and financial pressure for the farmer.

The main attraction of rare-breed hens is the beautiful eggs they lay. Their shells are often speckled, but I don’t think the taste is very different. The cost of looking after them is often greater too. Burford Browns are notoriously vicious.

Chickens are the closest living relative to the T-Rex and that means they have cannibalistic tendencies. The moment they get in any way stressed, they’ll take it out on the other hens. Personally I’d rather spend the extra money on ensuring the chickens have a unique diet. That makes much more of a difference in terms of taste and also contributes to the welfare of the chickens.

“Chickens are the closest living relative to the T-Rex and that means they have cannibalistic tendencies.”

DH: What makes the diet you give your hens unique?

BJ: I started working on developing a diet for the hens with chef Angela Hartnett. She was looking to get the right yolk for her pasta. One of the key things we did was to give them alfalfa from France. It’s rich in protein and other nutrients, but it does add £50/tonne to the cost of the feed.

To this we add marigold and paprika as natural colorants for the yolk. Normally the colouring is achieved by bio-equivalent dyes.

“Since we switched to the new diet, I’ve had customers saying they are now addicted to our eggs. They simply can’t find them tasting as good anywhere else!”

Since we switched to the new diet, I’ve had customers saying they are now addicted to our eggs. They simply can’t find them tasting as good anywhere else! We’ve also recently won Gold at the Taste of West awards for our pullet and large eggs and hopefully will do well at the Great Taste Awards this year too.

DH: An Australian vet, Dr. Charles Milne has recently come out and said that chickens are related to “forest-dwelling” animals and don’t like being free-range in open spaces. What are your thoughts on this?

BJ: If you spend any time watching chickens closely, you’ll realise that some like to be outside more than others. The comb on the top of their heads gives you a good indication of how much time a chicken spends indoors. The redder it is the more time outdoors the chicken has spent.

We have some chickens that spend nearly all their time inside making sure they are close to the feeder for when the food arrives, while others prefer to be outside. Whenever the new flocks arrive there will always be about a dozen that figure out how to escape by flying over the fence.

The funniest thing about them is that when it comes to feeding time, they’ll miraculously reappear, pretend they don’t know how to get back in and ask to be let back in via the egg collecting room!

“The thing about free-range is that the chickens have the choice to be inside or outside as they like. It’s up to them.”

DH: Beyond the economics what are the challenges of managing free range hens?

BJ: Chickens are very sensitive birds and get easily stressed. You have to ensure that they don’t get too cold, too hot or too wet. Even the air quality can affect them and turn them aggressive and unfortunately both poultry and pig farms tend to be put on unproductive land.

It’s often boggy, exposed or close to a motorway with poor air quality. If you’ve had the misfortune to place your new chicken house in the wrong place, you’ve probably invested heavily in that building and you’ve just given yourself a very difficult life managing the chickens.

We’re fortunate here in the New Forest that we have very good air quality and a good climate too. You can tell the air quality by the amount of lichen and moss we have.

Other than that, it’s also important to try and reduce the number of floor eggs you get, by making your nesting boxes as enticing as possible and there’s always the problem that at the end of the day people still think that eggs are eggs and don’t appreciate the differences.

DH: Can you get organic free-range eggs?

However, one of the issues for organic flocks especially in cooler climates is that the chickens don’t produce enough heat over night to keep the house warm enough for them. Chicken houses aren’t heated. They rely on the body mass of the chickens to keep them warm in the winter and the fewer chickens you have per square metre the harder this becomes.

They do huddle together overnight, but relative to the space they have to heat it’s often not enough. It’s also only possible to get the protein-rich wheat and soybean that forms a large part of a chicken’s diet organically from outside the UK – places like Ukraine, India and China – whereas our wheat comes from neighbouring farms in Wiltshire and Hampshire.