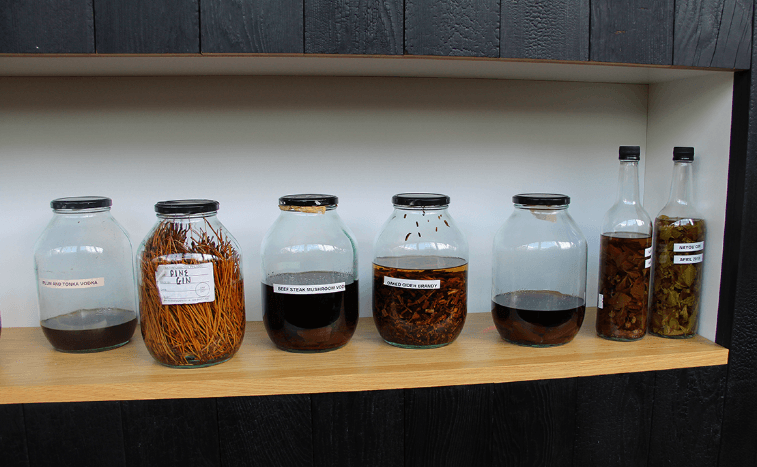 Hidden behind a stone wall on a tiny country road in Somerset, I find Matthew and Iain Pennington and their innovative, seasonal restaurant, The Ethicurean, near Bristol.

Over a surprisingly varied meal of fermented vegetables, cashew curd and fresh fish, Matthew spoke passionately about everything from the subterfuge exchange networks of fungi with raspberries, to the science of fermentation and gut health….

A mix of dishes at The Ethicurean

SD: How did you come to end up with this fabulous restaurant?

We used to find produce in the markets, cook it and sell it in the same markets so we had a closed loop. We’d been doing this for a few years, when a friend mentioned an opportunity for a “cafe near the airport” that we should take a look at.

I’ll confess it didn’t sound thrilling, but then he mentioned that it had an orchard with it and that made me change my mind. I’m so glad I came because to call it a “cafe near the airport” really doesn’t do this place justice as you can see!

It’s part of an old estate which has now been split up. Our bit includes these converted greenhouses and the walled garden. Over the road is the YMCA. We set it up during the recession seven years ago and it’s been a lot of hard work to get it to where it is now, but we finally broke even two years ago.

We were visited by Michel Roux Jnr and the Hidden Restaurant C4 series, which really lit up the diary and helped to get the business going. We didn’t start by wanting our own restaurant. We were more interested in encouraging sustainable food, but actually having our own restaurant is a great way of doing this.

SD: So what is your approach to creating sustainable food?

MP: It’s all about working with nature rather than making it do what you want. We work to seasonal menus that make the most of what’s available at different points in the year and we produce a lot of our own fruit and vegetables in the garden here.

We lease the garden out to gardener, Mark Cox, who sells his produce back to us. We’re now fully self-sufficient in salad leaves all year round! This is partly due to the oriental varieties that Mark plants. They actually like the cold and, protected from frost in the polytunnels, they thrive during the winter months.

We do have to source some ingredients from elsewhere. We wouldn’t be able to grow enough potatoes, for example, and it would be a dull day in the kitchen without any exotic dried spices, but we wouldn’t air freight in fresh produce.

In the garden Mark operates a no-dig practice, which involves heaping more manure and mushroom mulch onto beds before planting. The soil quickly digests this and after a couple of years the richness of the soil starts to increase the yield. If every farmer were to practice no-dig (no-till), we’d be able to lock up a huge amount of carbon and hit our emissions targets.

Mushrooms are a central part of the way we grow produce here. I’ve always been fascinated by fungi. They grow in a network and connect with other plants creating a kind of complex subterfuge trade.

We grow them under our raspberries, for example. They help to break down the wood chips and digest them into nutrients the raspberries need. And in exchange the raspberries offer sugar to the fungi. We’ve managed to extend our growing season for raspberries by three months as a result. In the orchard we grow 80 different heritage varieties of apples and make our own cider with it.

Fungi network growing in the wood chips beneath the raspberries – the orange dot is the start of a spore.

The path leading to the orchard

SD: What are the benefits of all the fermentation you do?

MP: Fermentation is a great way of preserving vegetables without a fridge. We pH test our ferments to check that they remain under a pH of 4. So long as they maintain this level of acidity they will last pretty much indefinitely.

Fermented vegetables are also good for gut health. This is a relatively emerging science, but it is becoming apparent how important it is to keep the right balance of good versus bad bacteria in the gut for your overall health.

Fermenting vegetables by introducing salt, essentially creates the perfect conditions for the good bacteria Lacto-bacillus to thrive while killing off bad bacteria like E-coli. Lacto-bacillus likes about 2% salinity and anaerobic conditions.

If you give it these conditions, it will break down the plant walls, extracting the juice and create an acidic environment which is what preserves the vegetables.

Fermented food by The Ethicurean, above and below

SD: You do a lot of foraging. What is your approach, and do you think there is a danger that we could over-forage?

I used to forage for food, but now I do it primarily to check on the state of biodiversity in the region. We took the decision to grow our own mushrooms so that we would reduce our pressure on the natural habitat.

Britain is one of the worst offenders when it comes to reducing biodiversity, so I am now focusing on how I can increase the biodiversity of the region by reintroducing specific plants to their natural habitats. I still forage for some plants, like the St. George’s mushrooms that I know grow in abundance in the same areas every year.

The problem with foraging is that it has now become a popular activity with people who don’t know what they are doing. There is a community of 60,000 people on Facebook who go foraging and then post photos with captions like “look at what I picked up! Anyone know what they are?”. This lack of knowledge means that their foraging is likely to be wasteful and harmful to the environment.

SD: Part of the ethos of The Ethicurean is to connect people with nature. How do you go about this?

MP: Partly just by running a local, seasonal menu, we are re-setting their culinary expectations to what nature provides naturally. We like to include unusual ingredients they won’t recognise so that they ask about them – specific flowers, for example, they might not have come across, but actually grow in the lay-by just down the road.

They also eat the food overlooking the garden where it comes from. In addition to the food, we offer fermentation classes and have teamed up with Rich Wright from the educational group Forever Fungi.

SD: Your menu is designed in an unusual way. What is the thinking behind this?

MP: We wanted to place vegetables first, so we’ve put all our vegetable dishes on the left-hand side of the menu and then under the header proteins on the right, we’ve suggested proteins you might like to add depending on your diet. It’s designed as a sharing menu, which gives you a meal rich in variety.

SD: What future plans do you have?

MP: We are planning to open a pop-up restaurant in Edinburgh. We did one before in John Lewis by Oxford Circus in London. It was pretty crazy, but it actually did make financial sense in the end. John Lewis did a lot of PR for it, which had a big impact, but still only really made a small dent on the London market.

It’s also all very well knowing that we’re working with the environment to the best effect here in our little bubble, but we want to encourage more people to work in this way. We’ve recently joined the Chefs’ Manifesto run by Arthur Potts Dawson from the UN to get more chefs committed to delivering on environmental targets. 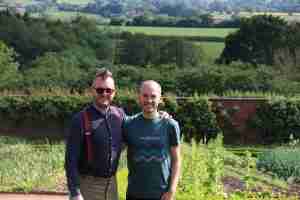 It came as no surprise that The Ethicurean should have a good base of loyal customers. A group of them briefly interrupted our conversation to ask when the menu was next going to change so that they could come again. Apparently they came to celebrate every one of their birthdays!