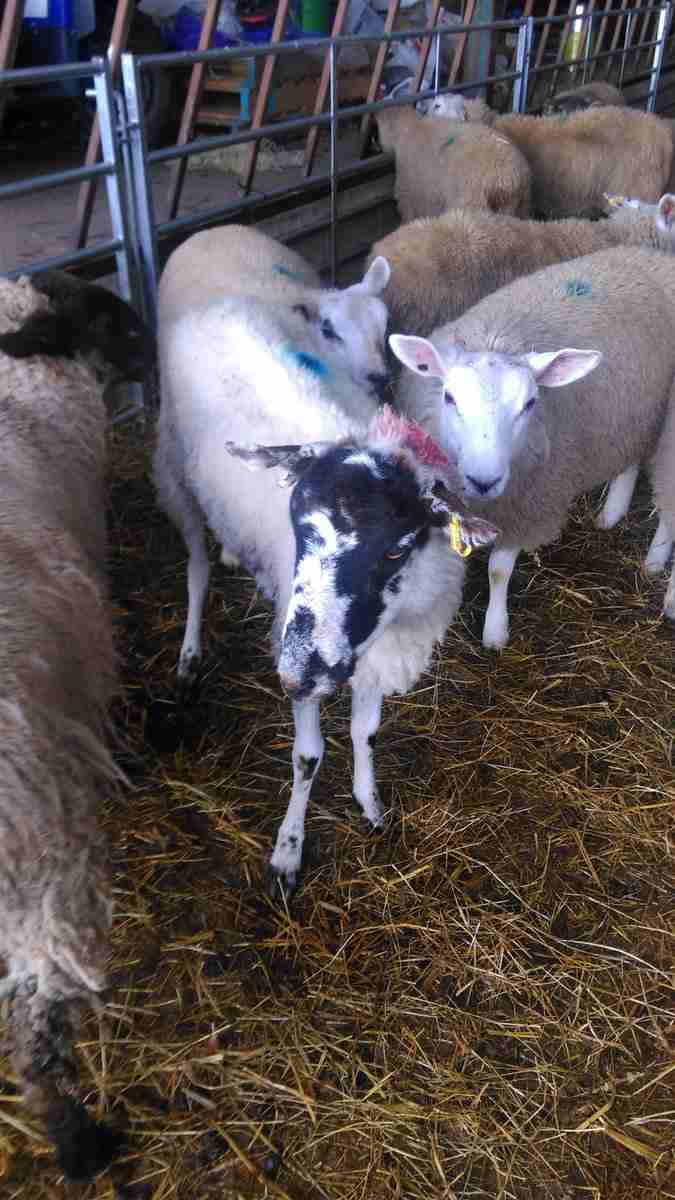 Scabby Ewe (affectionately known as Scabs or the Scabster) is one of our friendliest sheep.

This is her story.

In 2016, we scraped together the money to buy 20 new in-lamb ewes from a wild and woolly farm up in the Coquet Valley. Steve drove up one day in Spring to have a good look over the sheep for sale. He chose a group of chunky ewes, strong and healthy, with good teeth and working udders, all in lamb to a quality Suffolk tup.

We organised a livestock haulier for the next day, and everyone stood around excitedly as it arrived at High House. Steve heaved open the back of the lorry, and counted twenty bouncy sheep down the trailer ramp and into the sheep shed, which was all prepared for their arrival, with a bed of deep straw.

Steve was chatting to the lorry driver, and as I started to lift the ramp back into place I suddenly caught a flash of movement at the back of the truck. Calling to Steve, I watched in horror as a skeleton sheep emerged from the gloom and started wobbling unsteadily down the ramp, blinking her eyes against the afternoon sun.

It was one of the thinnest sheep I’d ever seen, with visible ribs and spindly pipe cleaner legs. She didn’t seem to be the same breed as the rest of the trailer load, and instead of having a black face and legs, she had a splotchy brown and white head, big ears that stuck out at right angles, bandy knock-knees and a patchwork of filthy grey wool over her jutting spine.

We watched in silence, our mouths open, as the skinny ewe tottered down the incline, carefully lowered herself off the bottom of the ramp and lurched into the sheep shed to join her friends.

“What the hell is THAT?!” said Steve, eventually finding his voice.

The ewe puttered uncertainly round her new shed, ricocheting off the walls and bouncing gently off her flock mates. Eventually she found a soft spot in the straw and lay down with a sigh and immediately went to sleep.

To avoid any shouting, I volunteered to ring the sheep sales man, to ask him how on earth we’d managed to buy 20 new ewes plus one strange addition.

“Oh bloody hell”, he said, when he answered the phone, “I must have put her in the wrong batch. She was going to the knacker man at the end of the week.”

“Oh god no. No no no no. Definitely not. No, not been anywhere near a tup. There’s something the matter with her. I wouldn’t put her in lamb. But don’t send her back. I really don’t want her. You can have her for free.”

The skinny ewe was still asleep when we got back to the shed, and lay there quietly as Steve carefully checked her over. Her mouth and jaw were very strange.

“She’s got a shuttlegob, an undershot jaw, look…”, said Steve whilst moving her mouth gently up and down. “Her bottom teeth don’t meet with the top pad. She won’t be able to chew grass. No wonder she’s thin. I’ll have to send her to the knacker man. She can hardly stand up…”

Scabby was now lying on her chest, with all four skinny legs tucked up, gamely sucking on a wisp of hay.

There was no way I was going to pass her onto someone else, or put her down.

“She might be in lamb. Can’t we keep her just in case?”

After a long discussion, Steve agreed that I could look after her, as long as I promised not to tell any of the rough, tough sheep farmers in Northumberland that we’d turned into an animal rescue operation.

The kids named her “Scabby” and through trial and error I discovered that she could eat sheep feed by hoovering it into her mouth and sort of sucking it until it was soft enough to swallow. From that day on she ate her body weight in very expensive sheep “nuts” (pelleted sheep feed) and grew very, very tame.

My son adopted her as his “most favouritest sheep EVER” and she began to follow us around the farm, poking her nose into coat pockets and horse buckets, inspecting feed troughs and hay bales. Scabby even slowly started to put on weight, her hollow flanks filling out and her legs becoming less twig-like. 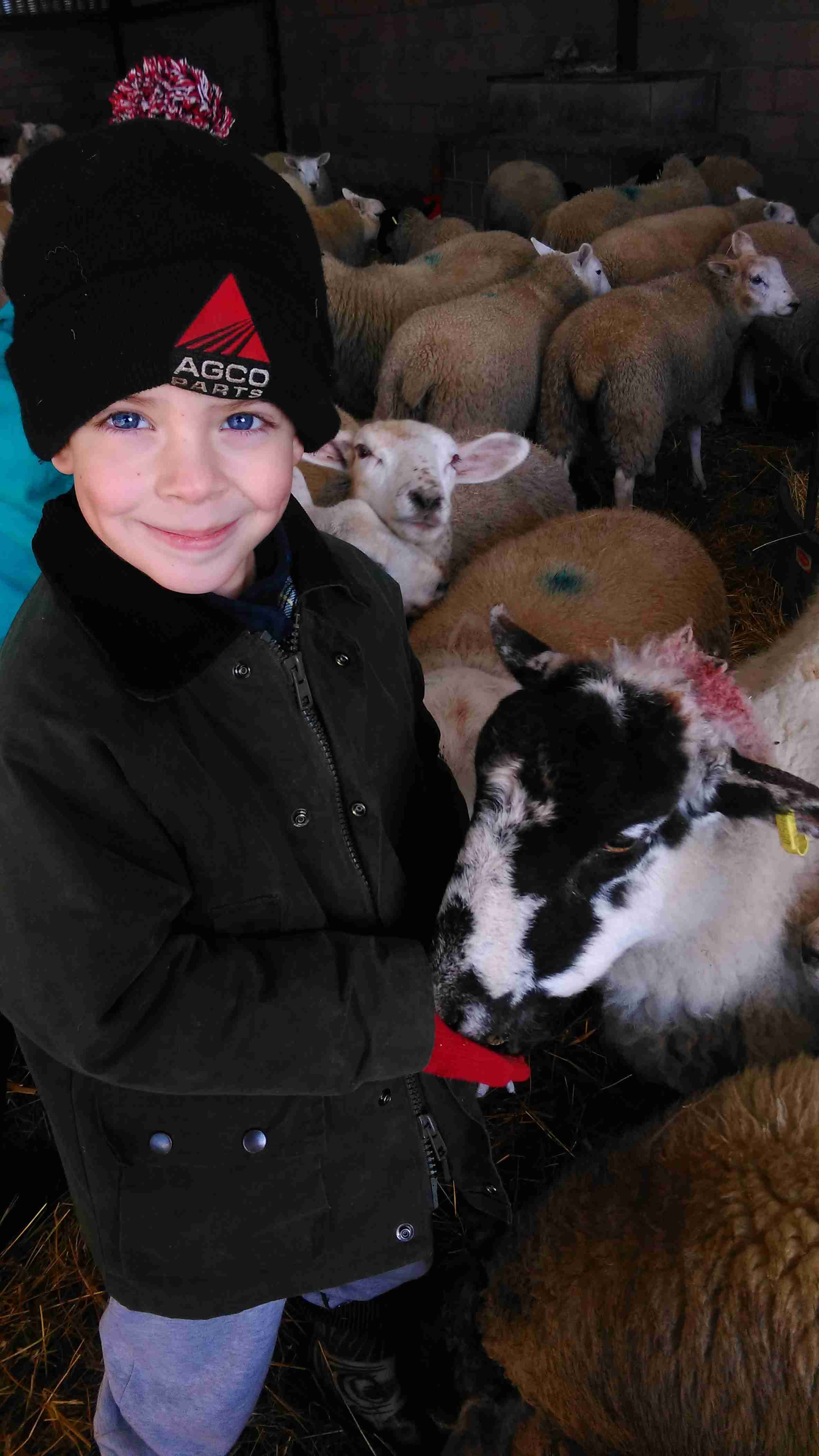 And she was in lamb. Of course she was. The scanner man told us she was carrying a single. Which was just as well as no matter how much feed we poured into her, she never really put on much weight.

We kept her in the shed, out of the weather for the rest of the year, until she managed to heave out a skinny scrap of a lamb, with splotchy knees and bat like ears. Scabby turned out to be a very good mother, and with lots of extra sheep nuts managed to produce just enough milk to feed her baby.

Once the lambs had been weaned, Steve put his foot down, and took Scabby out of the flock into a small group of “cast ewes”, who were destined to go to the Mart sale in the Spring. I rebelled and kept secretly liberating her from the shed, so she could follow me around and get in the way.

One day last week, I got a call from Steve on my mobile.

“Look, I’ve got Scabby on the scales and she actually weighs enough to go to the Mart. Can I take her tomorrow?”

The Save Scabby Ewe Project swung into action and after a lot of wailing, Steve was forbidden to load her up with the rest of the old ewes. I even sprayed “Scabby” with a heart shape onto her side in blue marker paint so that he’d be too embarrassed to take her into the ring.

So Scabby remains. I really don’t think that Steve intended to sell her. I don’t think he’d dare. Scabby is now our High House mascot, and spends her time lying under a gorse bush, snoozing in the sunshine.

She’s at the bottom of the pecking order and spends a lot of time on the outskirts of her flock, but she acts as a sort of unofficial auntie to the newborn lambs and young ewes. She can be seen gamely bobbling around the fields, inhaling grass blade by blade and costing an absolute fortune in sheep feed.