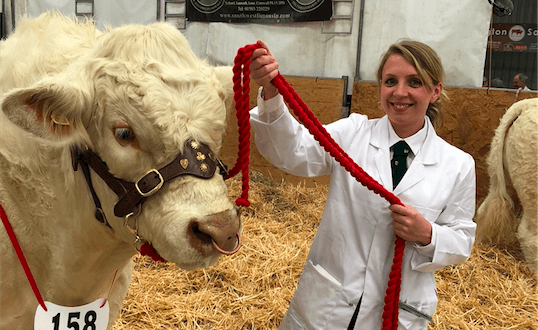 People are genuinely interested in the livestock and farming and it’s a great opportunity to inspire and educate people in a really fun and sociable way – a point that was highlighted to me at Royal Cornwall show when we walked Merlin from the cattle shed up to the grand parade.

It started to pour with rain as we headed out from the sheds and if I’m honest, it was the last day of the show, we were tired, fed up and looking forward to getting home, so we weren’t really up for it.

But we were keen to take Merlin out to stretch his legs and show our support for the show, so we got ready and headed out in the rain.

The walk to the ring is quite a long one and I couldn’t believe how many people where there! As we walked through the crowd I instantly knew why we had bothered to come out – to properly showcase what we do and inspire people to think about it.

Everyone was commenting about the cattle and Merlin – it was incredible! He made such an impact with the crowd and in that moment I could see that people were clearly really engaged with us and the cattle and they asked so many questions.

I wanted to share some of the questions we had, and our answers about how we work/do things which I hope you’ll find interesting…

1. “Do you drug the cattle to keep them quiet when they’re at the show?”

Absolutely not!  I know it is hard to believe that we don’t when you see such a big bull like Merlin laying in his stall in the cattle shed chewing his cud, unaffected by the people and noises all around him. But he’s well fed and watered, comfortable, and he has his friends around him – so he’s happy.

Even for Newbury who is newer to the show scene, after an hour or so in her new surroundings she was relaxed and used to her temporary home and carried on being her usual, cute and charming self.

2. “How do you halter train the cattle?”

We got asked this question from farmers and non-farmers alike and before I explain the steps we take, it’s worth saying that there is a difference between being halter-broken, which most of our cattle are, to being halter-trained and able to take a cow in to a show ring.

The training starts the same way though when the cattle are young, and involves us putting halters on the calfs – and if they’re small enough, holding on to them, or tying the rope to a gate under close supervision.

We try and do this little and often and it’s surprising how quickly the calfs realise that they won’t come to any harm whilst on the halter.

You’ll know when they’re halter-broken as they’ll be relaxed and happy when tied-up, and with you in amongst them perhaps giving them the odd back-scratch.

The next phase of the process, the training aspect, takes a lot of time, patience and practice. Ed spent hours working with Newbury one-to-one to get her comfortable being led. I even had a go too.

We would walk her from shed to shed across the yard where she would get food. We took her on to grass and practiced judging – I would play judge or we would ask Peter as she was less familiar with him.

We took her up the lane, and around the farm to get her used to different stimuli and whenever she was on the halter or we went to see her in the shed we would constantly talk to her. Reassuring her and giving her instruction about what we wanted her to do.

To start with she was like a sulky teenager and either refused to move or tried to pull away so it took a bit of strength to move her how we wanted to stay with. Hence why we start them young so we can actually physically do this.

Ed says they’re just testing boundaries though as even in the pictures above if Newbury really wanted to run off she could, but we have to show her who is boss, but in a calm, gentle and positive way (a bit like with dog training).

We also did lots of washing, petting and grooming. To get her used to this aspect of the show. And I think perhaps most importantly of all we never let go of the end of the halter!

3. “How does Merlin get so muscly and how much does he weigh?”

So Merlin has just had his second birthday and currently weighs in at just over a tonne with a bit more growing to do!

And why is he so muscly? Well Ed would simply say ‘because he’s a great bull!’ But what that translates to, is that it’s in his DNA.

The breed characteristics for the Charolais, which Merlin is, is to have thick-set bones and plenty of muscle. So a lot of his physique is down to good breeding.

But he’s also been out working – a.k.a chasing around the girls – so he’s had plenty of exercise and alongside his grass-led diet has also been having some high quality show mix to help him keep his condition as believe it or not, at the shows the judges like to see some fat coverage along with the muscle too.

And in fact at Royal Cornwall show, Merlin whilst looking ripped, really was looking too lean. 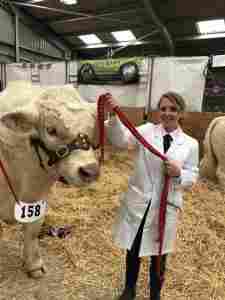 This is a really difficult question to answer. A cow with no human intervention and all being well could live until it’s around 20 years old. We have some cattle on the farm who see out their retirement with us in to their elder years. But typically cattle are kept for commercial purposes so their life span is shorter than that.

A number of factors get considered by farmers when they decide to cull an animal, including fertility, temperament overall health and confirmation.

On our farm most of our cattle are either kept on for our own breeding or sold on to other farmers for the same purpose so they have a good chance of living in to their late teens.

A few that don’t make the grade enter the food chain earlier, particularly on the male side but it’s a small percentage of the overall herd each year.

The straightforward answer to this is “yes”. We are beef farmers first and foremost and we enjoying eating beef, which we do with respect and gratitude for the life that was given in order for us to eat. We also focus on traceability so we can be sure we are eating beef that has come from an ethical, sustainable and high-welfare source.

We actually very rarely end up eating our own animals from the farm as they are our main source of income so we rely on the money from the sale of them (dead or alive) to run our business.

Show cattle can fetch some serious money! Particularly for those at the top of the game who are winning prizes and are setting the standards of what the pedigree traits and characteristics of the breeds should be. I’ve heard of one heifer being bought for £120,000! Just wow.

To give you some idea, we bought Merlin from a sale in Carlisle last year for 8,000 Guineas – which is £8,400 and as he matures and hopefully continues to win prizes his value could go up.

But like with anything, it depends how much someone is willing to pay for him and how his genetics play through in to his offspring and how easy calving he will be.

At the moment his value to us is priceless. He’s working hard on the farm, having an impact on the show circuit and we’re hoping to see a return on our investment in his progeny.

If you have any more questions, get in touch.