Everything on a farm works hard and an engine is no exception. Regardless of whether it is gas or diesel, in a tractor, combine, sprayer or pick-up, one fact remains… the conversion of chemical-to-mechanical energy produces heat.

The harder the engine works the more fuel it consumes. Each gallon of fuel has a heating value measured in British thermal units (Btu). Thus, the thermal load is intrinsically linked to the rate of fuel consumption.

This is not to be confused with the temperature gauge reading which is the heat absorbed by the liquid coolant. Under high load the liquid temperature may not change much or at all, but the rest of the engine and especially the exhaust temperature goes up substantially. This raises the under hood temperature.

On newer diesels this is exacerbated by the lack of under hood air movement and other factors such as EGR, turbocharging, and an A/C system. It needs to be recognised that elevated under hood temperature is the silent killer of engines and their components. 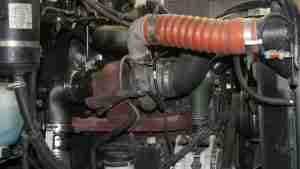 Heat is the enemy of everything under the hood and results is a shorter service life. Rubber hoses and belts, engine gaskets, wires, sensors, electronics, seals, alternator, battery, radiator, emissions system, and A/C components are all degraded during heat soak. Even the engine block and cylinder head along with the turbocharger are impacted.

The good news is that it is quite simple to reduce this effect. Simply idle the engine for one minute before shutting it down and then open the hood.

Letting the engine run for just one minute will allow the cooling system to work and limit the thermal excursion.

Since heat rises, opening the hood will allow it to travel into the atmosphere instead of being absorbed. When you are done for the day or are stopping work for some reason, just open the hood and let the heat escape. It may take a post-it note on the dashboard to get you into the habit but this little effort will pay huge dividends over time.

Be prepared to enjoy longer gasket, hose, electronics and belt life while not having all the connections and wires become brittle. It will make the difference between a simple task turning into a nightmare because a connection broke when you touched it.

Today’s trucks and farm equipment have an engine compartment that creates heat soak. So, if you want any engine and its systems to last substantially longer, just open the hood and let the heat out!

*Ray is a farmer in New Jersey, USA. He wants to use his knowledge and love of machinery to help farmers prosper. He says; I want your yield bump and business savvy reinvested to bring more value to the next harvest season and not consumed by avoidable equipment failures. For this reason, I have created the Farm Machinery Digest website and Idle Chatter podcast. It is a means for me to transfer knowledge to you about all aspects of the equipment that is employed in modern-production agriculture.