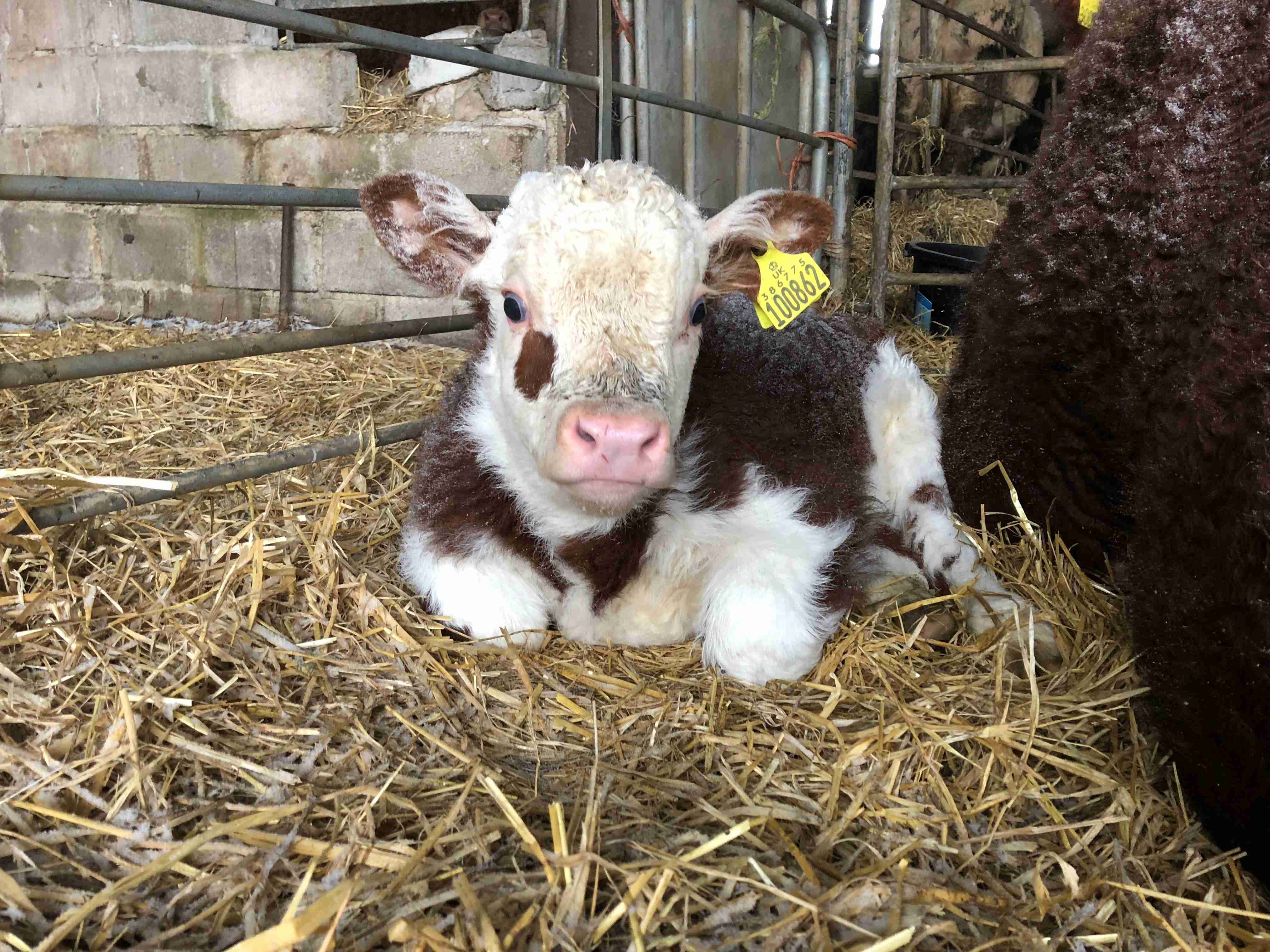 I’ll never forget my first experience of calving. It involved me standing in the shadows of the barn, mouth wide open, frozen by fear, reluctant to breath incase I made too much noise and interrupted what was going on. But I was transfixed by what was taking place in front of me.

I was watching Ed and Margaret work together, almost silently, to pull a calf out from inside it’s mother.  Arms were in, ropes were on and Ed and his mum were working with this magnificent animal to gently pull out the calf as she naturally contracted.

I was mesmerised, clueless and shocked! What was happening? How would this end? And eeeewwwwww there was a lot of funny looking stuff and blood all around!

The miracle of life

I remember the feeling of elation and relief when the calf ‘hit the deck’.  Finally I could breath.  Ed and his Mum stepped back, calf alive and alert, the cow tentatively licking up  her new born baby.

My first thought –  wow is this what childbirth is going to be like?!!!!  My second, was how much I fancied Ed – talent is sexy right?  And my third, was what an incredible thing that Ed and Margaret had done – I wanted in!

For the following few days I would go out of my way to take a sneak peak at the cow and her calf (pictured above) and I couldn’t believe how quickly the calf was up and skipping around the pen doing happy laps.  To me this was a miracle!  Yes I know things are born every second of every day, but I’d never been so close to the action before.

Since that experience, I’ve witnessed a number of calves being born, often sat on the side-lines watching/observing and praying that all will go OK.   And as time has gone on, I’ve also been lucky enough to get involved with the delivery of a handful of calves; always accompanied and heavily instructed on what to do by the experts. And always fuelled on adrenaline –  as I’m often sh*tting myself while I’m doing it.

The incredible high you have when you deliver a new life in to the world, I’m sure is one that doesn’t go away.  Surely there’s nothing else like it?  I know when calving season approached Ed was super excited and really looking forward to welcoming the new babies on to the farm. It’s without a doubt his favourite part of the job.

Knowing when to call the vet

But with the highs, come some serious lows.  Nature as we all know is not always kind.  And whilst the ratio of live-to-dead calves born is significantly in favour of the living,  I’ve also witnessed some calving experiences which haven’t ended so well.

I guess like any maternity unit across the UK, things don’t always go to plan.  And that’s not through anyone’s fault or lack of attention or capability, but because the variables in nature are such that it is ultimately out of our control.

On a farm it’s our responsibility to recognise when things aren’t going as they should and to make that all important call, to ring the vet.  We’ve had vets here for a variety of reasons over the time I’ve been here. During calving time it’s usually to support with the delivery of the calves that aren’t able to come in to the world on their own.

Like humans, sometimes cows have to have caesareans – an event which took place on the farm this weekend.  One of our cows was in labour but it became clear that she wasn’t going to be able to give birth naturally, despite having had many natural births in the past.

The vets arrived quickly, there’s always two for this procedure and were fantastic – thank you Castle Vets!

The cow, named Velvet, was moved in to the crush to ensure her safety and then the operation began.  The vets were incredible, they worked quickly – as time is of the essence – and everyone was delighted when a live calf was lifted out of the cow.

His airways were full of mucus so he was lifted and draped over a gate with his head hanging down to help drain the fluid.  And then he was placed on the straw to keep warm while the attentions turned back to Velvet who needed to be stitched up and given the after-care she needed.

After this caesarean, it was decided the best course of action was to stomach-tube the calf.  This ensures that it gets the all important colostrum it needs to set it off on the right track and allows the cow some time to recover before she has to start rearing the calf herself.

Margaret has lots of experience in feeding calves in this way so took the lead in doing it not long after the calf arrived.  At this point, after a stressful few hours, all was well in the world.

By morning, the position had changed and sadly, despite checking on the bull calf during the night and all seeming to be OK, he died.  No-one could believe it.  How did this happen?  What went wrong?  Was it something we did that caused this?

As you can imagine everyone felt pretty upset and deflated about the loss of life, but we were determined to understand what had happened. We took the calf to the vet, who was also gutted about the news and he performed a post-mortem.

Needless to say, we wanted a post-mortem to see if there is anything we can influence to stop something like this from happening again.We’ve only scratched the surface of this years calving and we want to give all our cows and calves the best possible chance at life.

The vet skilfully cut through the dead calf’s, skin, flesh and bones to expose the chest cavity and then removed the heart, lungs and trachea to inspect them. Lungs – healthy. Trachea – clear. But the heart did show some signs of haemorrhage.

But when the heart was cut open there wasn’t anything out of the ordinary, or any clues as to why the haemorrhage was there. So the vet went on to examine the thyroid.

He explained that the thyroids size should be proportionate to the size of the calf and on a first glance he felt that this calf’s thyroid had been big. He’s taken it away to do some more testing and at the time of writing we’re awaiting further results.

I’m sure this story, of life and death, is a familiar one to all of the farmers who breed their own livestock. There’s a sense of responsibility and a sick-to-your-stomach feeling when things don’t go well.  It’s horrible, heart-breaking and can be really difficult to process – but I guess that’s death in general, full stop.

In farming though, you have to be resilient and although it sounds cold, move on. As Margaret says; “it isn’t the first and it won’t be last.”

Making the best of a bad situation

So attentions turned to how to make the best of a bad situation. During the ‘Beast from the East’ storm we put a man-made calf jacket on to a newly born bull calf, as he was very cold.  Unfortunately, his mother then rejected him and we think the unfamiliar smell of the jacked, along with the fact his mum had another more lively calf already to fuss over (he was a twin), meant she wasn’t worried about this one.

So, with the body of the dead calf back from the vet, we skinned it, and put the skin on this the rejected calf, like a jacked. With his new skin jacket on, we put him in a pen with Velvet, who, full of natural hormones, milk and a little encouragement from us, has started to take an interest in the bull calf as if he were her own. This is a fantastic outcome given the circumstances

Since the caesarean, and loss of Velvet’s calf on Saturday morning we’ve had four Limousin calves born successfully and two little lambs – all in the space of 24 hours.

It’s been a truly epic weekend, with a rollercoaster of emotions and some serious highs and lows – something I know is set to continue for the rest of this years’ calving period. But I wouldn’t change it for the world.